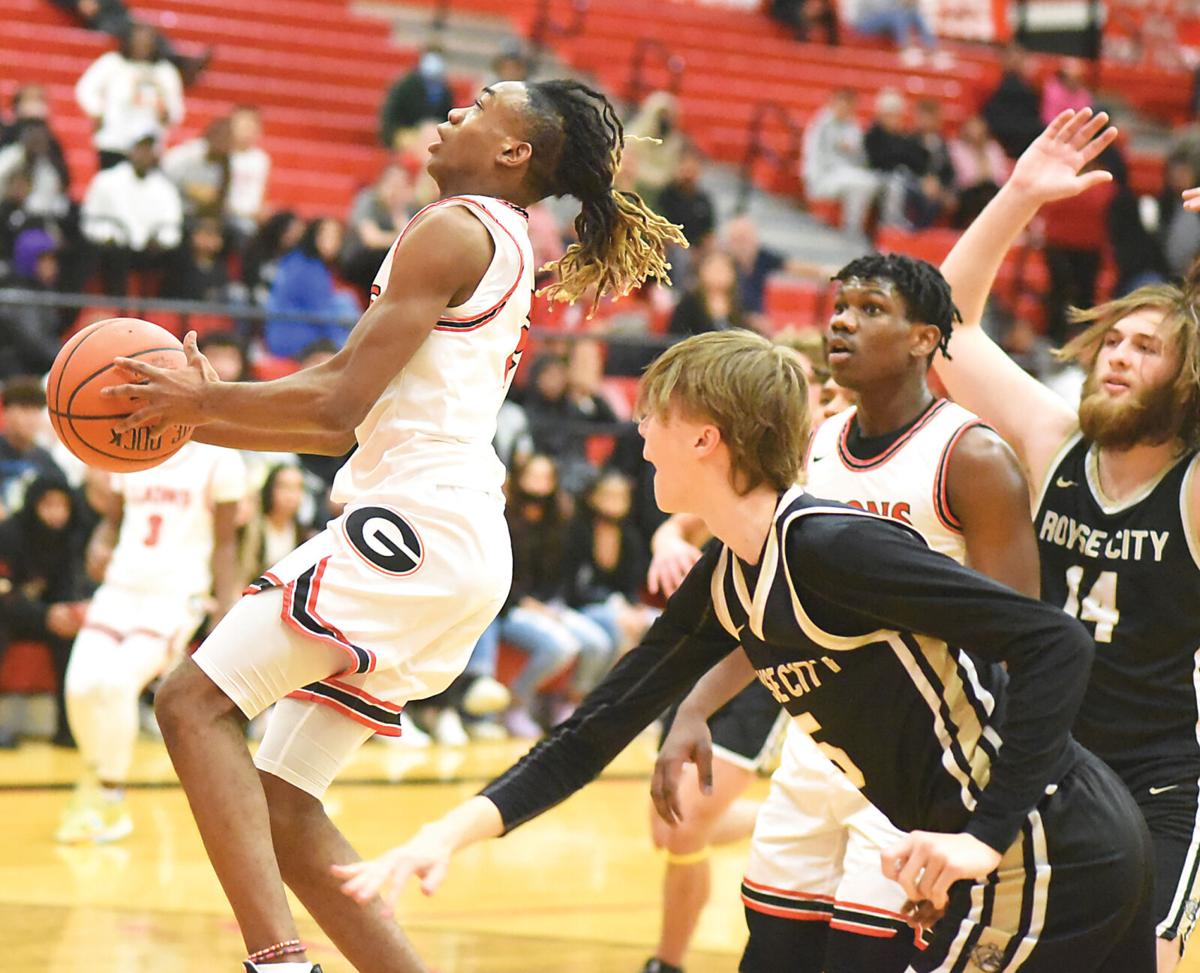 Antwon Anderson beats Royse City inside for a layup during the Greenville Lions’ 79-73 District 13-5A victory on Tuesday. 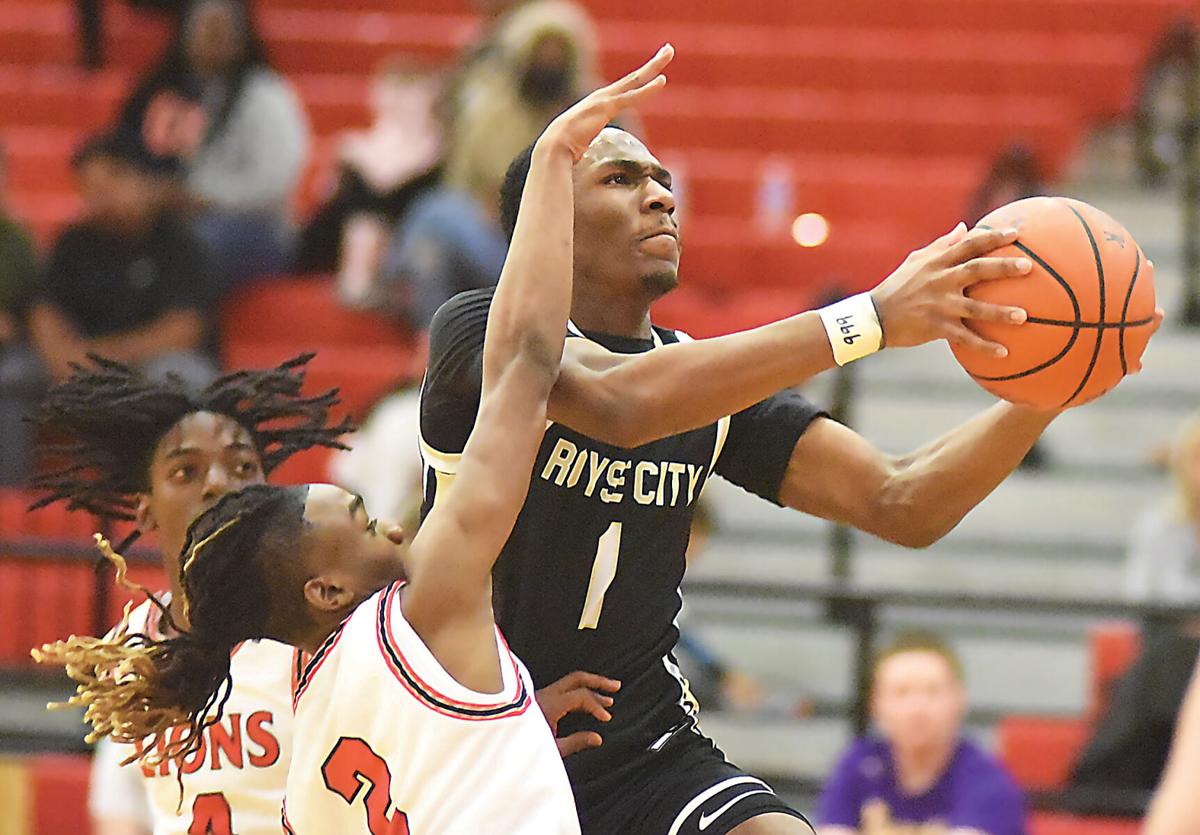 Gavin Alexander of Royse City challenges Greenville defender Antwon Anderson during their big District 13-5A game in Greenville on Tuesday. 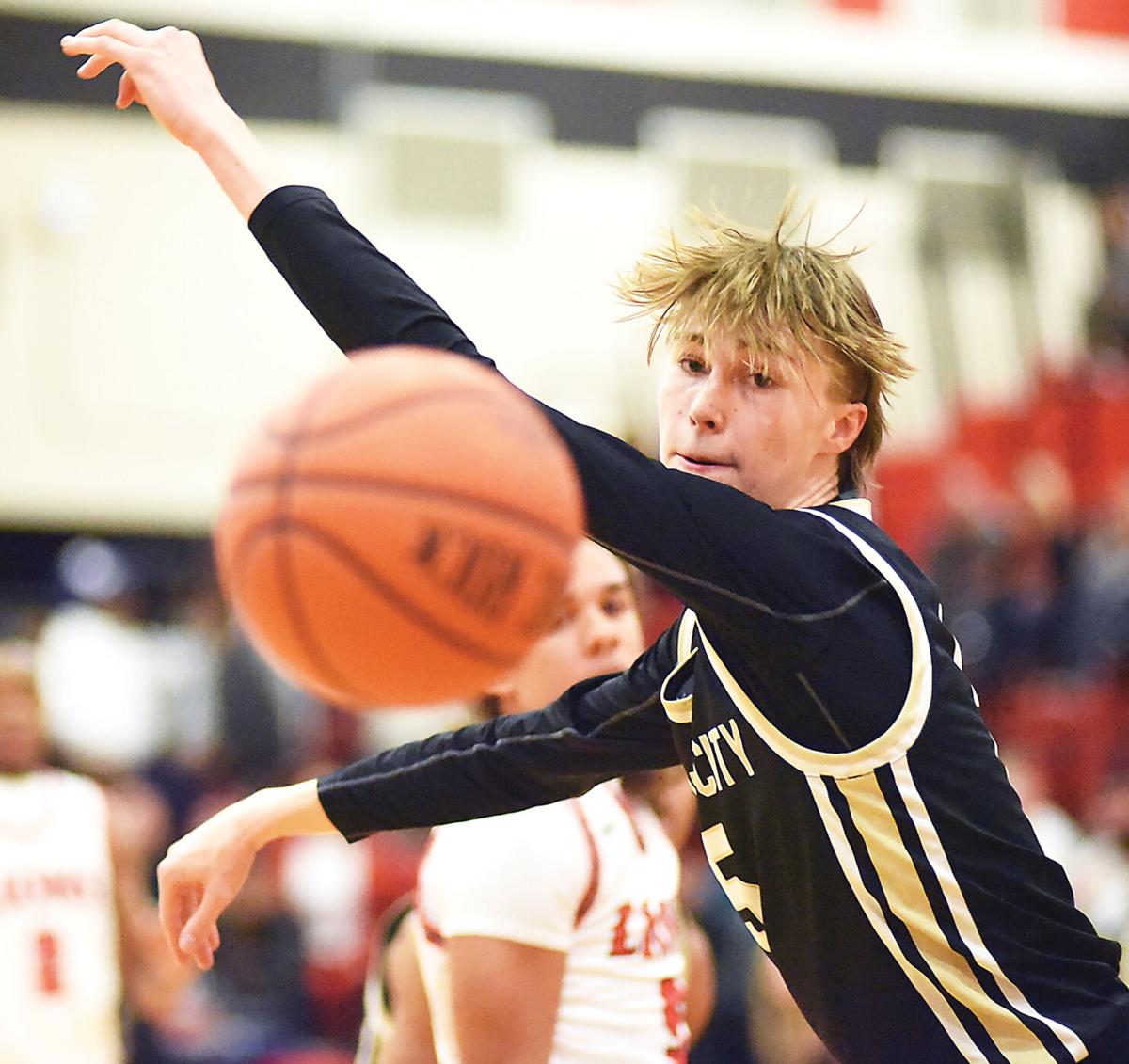 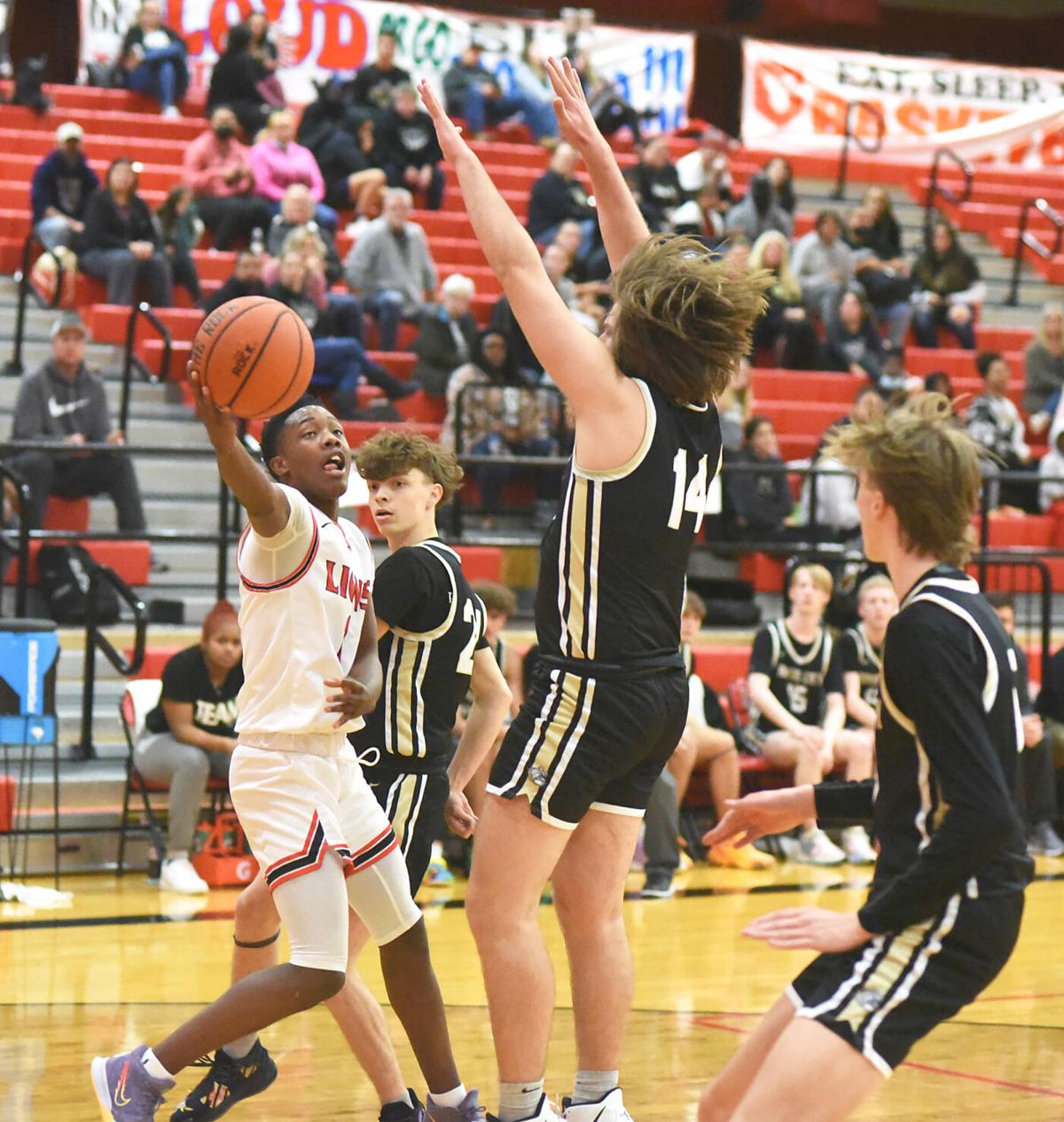 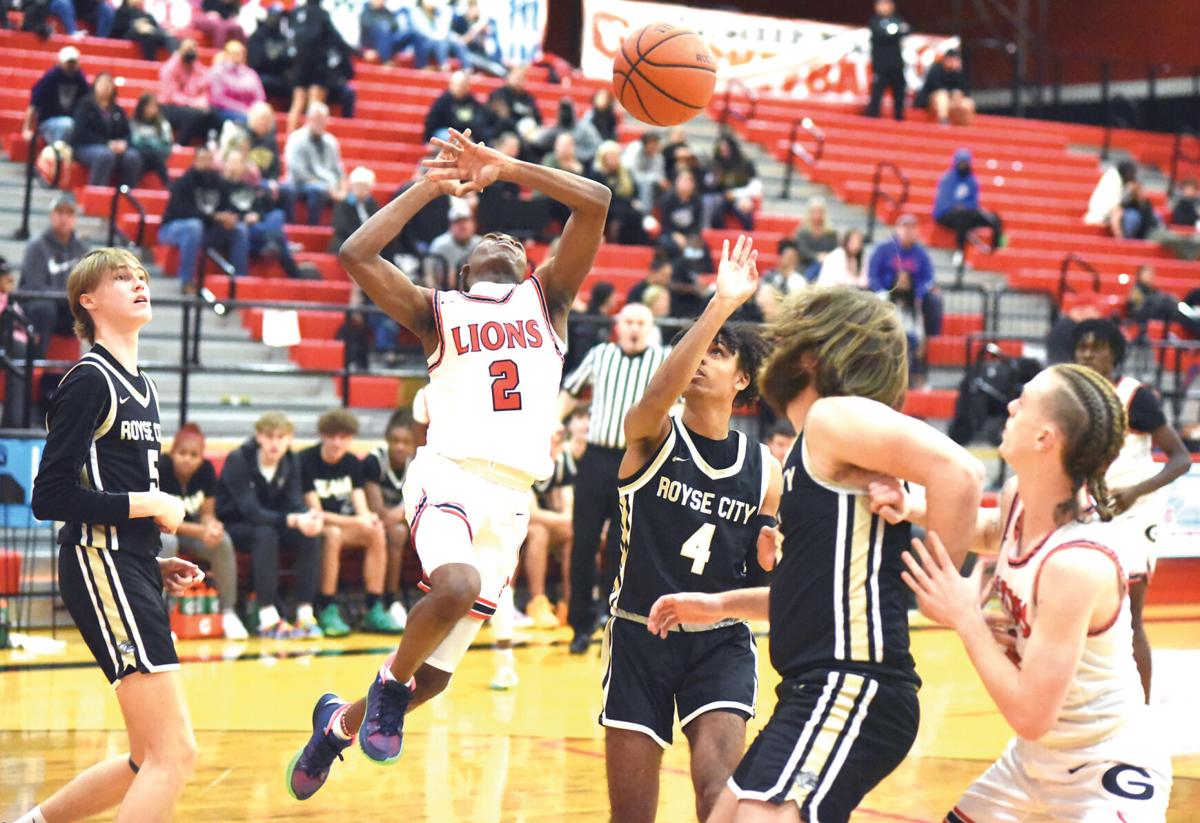 Antwon Anderson of Greenville gets the ball knocked out of his hands in the Lions' home game against Royse City.

Antwon Anderson beats Royse City inside for a layup during the Greenville Lions’ 79-73 District 13-5A victory on Tuesday.

Gavin Alexander of Royse City challenges Greenville defender Antwon Anderson during their big District 13-5A game in Greenville on Tuesday.

Antwon Anderson of Greenville gets the ball knocked out of his hands in the Lions' home game against Royse City.

The Greenville Lions were off the mark in their shoot-around before they took on Royse City in a big District 13-5A basketball game at home on Tuesday.

“We didn’t have a good shoot-around today,” said Lions coach Chris Williams. “I told them two things are going to happen. You’re either going to come out on fire or we’re going to play like we practiced.”

Toodie Davis hit a 3-pointer on the Lions’ first shot and Greenville never trailed in a 79-73 victory over Royse City. The Lions improved to 15-7 for the season and stayed unbeaten in district play at 2-0. Royse City dropped to 19-4 overall and 1-1 in district play.

“I knew what type of game it was going to be when he hit that three at the first of the game,” said Williams.

Antwon Anderson scored 10 points in the fourth quarter to finish with a game-high 25 points for the Lions. Anderson kept bringing the ball to the hoop and when he didn’t score a layup he got fouled. Anderson was 9-of-10 from the free throw line.

Keaton Heard also pitched in 14 points for the Lions, including eight points in a big second quarter.

“Keaton Heard, Degaryion Anderson, Zak Wylie, they rebounded the heck out of it and that was big time,” said Williams.

Gavin Anderson pumped in 19 points to lead the Bulldogs, who also collected 14 each from Donovan Alexander and Chase Ferguson and 13 from Nicholas Weaver.

“He’s a really good guy and he has a good team,” said the Greenville coach. “They are really well-coached and they get after it.”

“Greenville is a very good, well coached basketball team and I thought they played a great game tonight,” said Bookout. “We made too many mental errors to win a highly contested game. I thought our guys did some good things, but we have to find a way to bring our A game every night in this district. Every game is going to be very competitive, but I have all the confidence in the world in our guys and know we will bounce back.”

The Lions are scheduled to resume district play at home on Friday against Mesquite Poteet, which is also 2-0 in district play after beating defending district champion Highland Park 41-34 and then North Forney 63-47.

Royse City is scheduled to play at home on Friday against Crandall.

No. 18 state-ranked Royse City rolled to a 67-29 District 13-5A basketball victory over the host Greenville Lady Lions on Tuesday.

The Bulldogs stormed out to a 26-1 lead in the first quarter and never looked back as they improved to 21-3 for the season and 3-1 in district play.

MERIT — The Bland Lady Tigers squared their District 14-2A record at 2-2 with a 57-36 win on Tuesday over Sam Rayburn.

Nathan Lofton and Yahya Aitku both tossed in nine points for the Panthers, who improved to 6-7 for the season.

“I am proud of the way our varsity boys played,” said PTAA coach Marcus Smith. “We played hard and worked together to capture the win. We started off slow, but we picked up our defensive intensity and was able to gain a big lead and maintain the lead throughout the game. I was pleased that when we faced adversity at the beginning of the game we kept fighting and working together.”

PTAA will be holding its “Jam the Gym” game at home on Friday against Fannindel.

“We ask for the community to come out and see what’s going on at the PTAA Panthers gym,” said Smith.

The junior varsity boys will play first at 5 p.m. followed by the varsity girls and then varsity boys.

PTAA’s girls did not play Savoy because the Lady Cards’ team was in quarantine due to the pandemic, according to Smith.