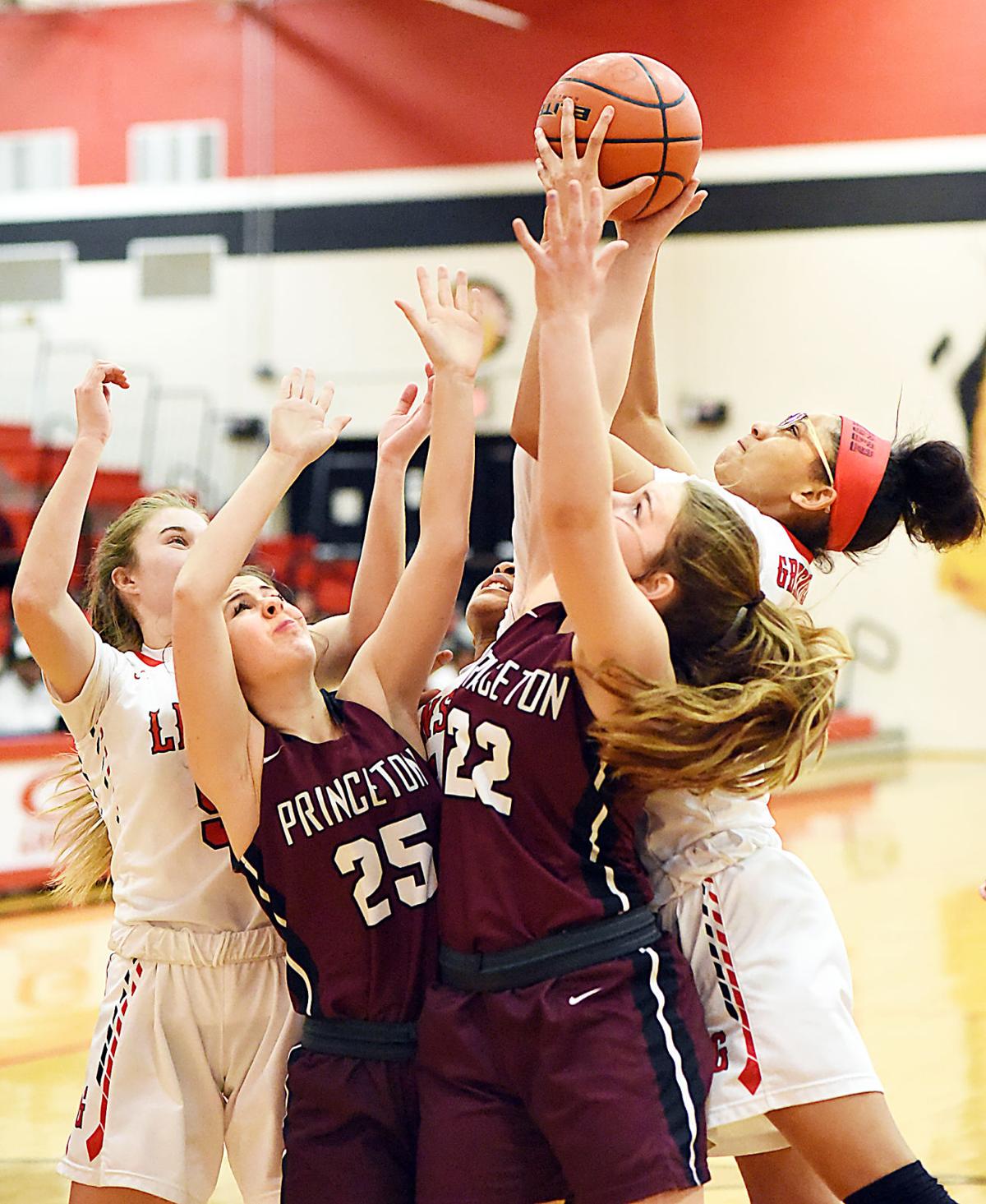 Five players from Greenville and Princeton battle for a rebound including Greenville’s Cerria Baysinger, who is on top of the ball. 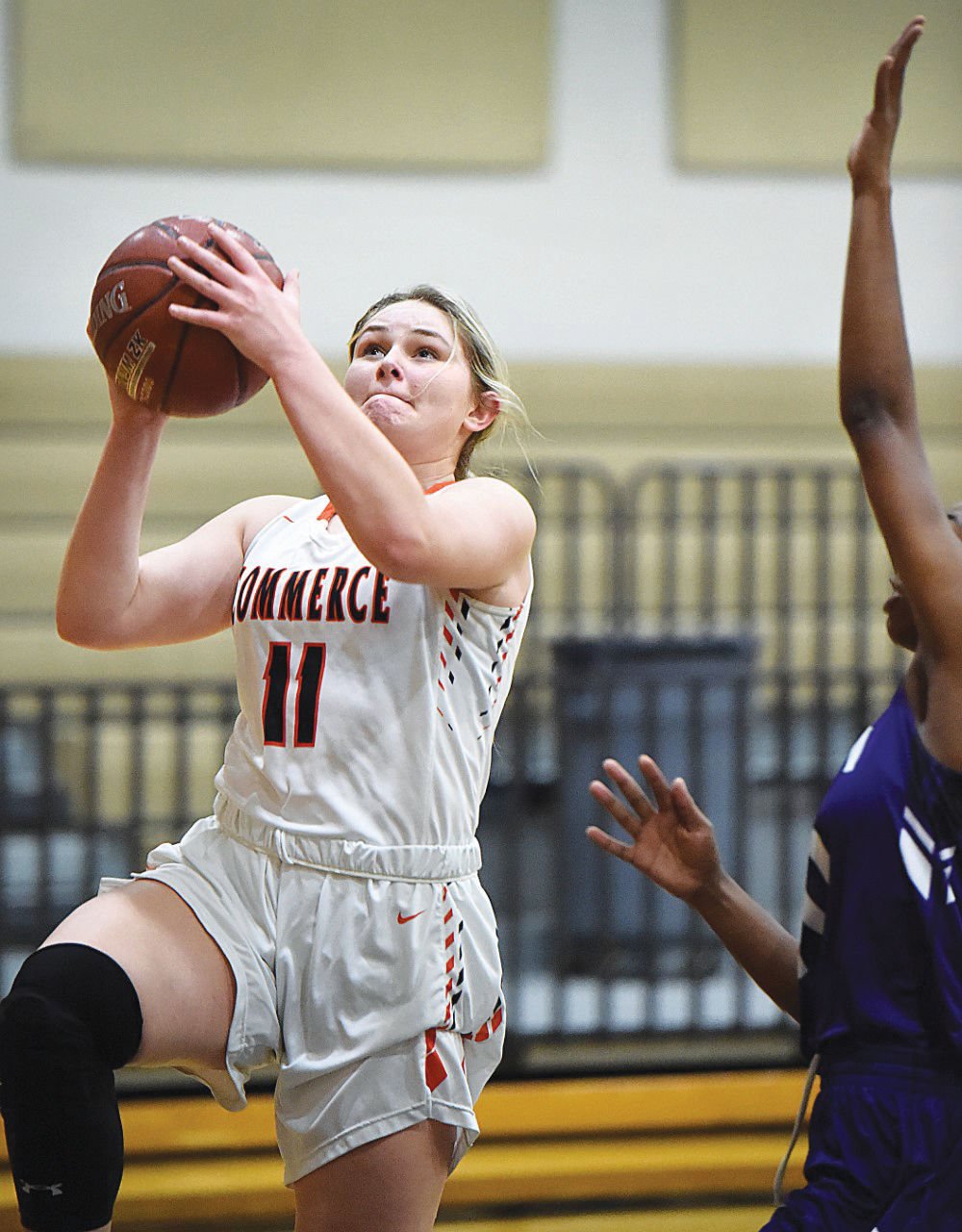 Allie Wittkopf drives to the basket for the Commerce Lady Tigers.

Five players from Greenville and Princeton battle for a rebound including Greenville’s Cerria Baysinger, who is on top of the ball.

Allie Wittkopf drives to the basket for the Commerce Lady Tigers.

Princeton raises its record to 8-4 for the season, while Greenville falls to 1-11.

Raylee Cave fired in a team-high 14 points for Princeton, while Makenna Walker and Kaitlyn McKenna each tallied 12.

“Offensively we were bad tonight,” said Greenville coach Erica Delley. “We have to hit our open shots. We only had eight points in two quarters. Rains will be tough on Friday. We have to come out and play.”

Princeton outscored Greenville in three of the four quarters on Tuesday.

The Lady Lions will travel to Emory on Friday to take on the Lady Wildcats at 6:30 p.m. varsity game only.

Next game: Greenville at Emory Rains, 6:30 p.m. Friday (varsity only)

COMMERCE — What was shaping up to be a cake walk for the Commerce Lady Tiger basketball team turned into a nail-biter by the end, but the Lady Tigers held firm and took a 34-29 victory over the Bonham Lady Warriors on Tuesday night.

Commerce led by as many as 16 points heading into the fourth quarter.

Mia Rudin had a slow start for the Lady Tigers, but became a force under the rim in the second half. She finished with a double-double, with 10 points and 13 rebounds, both team-highs.

Breann Mulcahy had a solid night with nine points and eight boards.

Mya Wilson struggled from the floor, only scoring one point and missing on all 10 of her shots, but she had five assists and two rebounds.

Cadye Shaw and Arleen Depich each had two points.

“They are resilient, they hung tough when it wasn’t going their way and got the win,” Henry said. “It’s just always important to not get content and always push hard.”

Henry added that his team needed this win at home after a rough tournament in Chapel Hill where the team went 1-4 over the weekend.

The victory over Bonham puts Commerce at a record of 9-7 so far this season. The Lady Tigers remain at home to face Quitman on Friday in the final game before district play begins. First tip is scheduled for 6:30 p.m.

Freshman McKaelen Reynolds fired in 21 points and Josie Jenkins banked in 17 to lead the Lady Foxes, who are now 9-5 for the season.

CUMBY — Cumby outscored Greenville Pioneer Technology and Arts Academy 30-18 in the second half to claim a 47-33 victory on Tuesday.

CADDO MILLS — Caddo Mills upped its season record to 5-2 with a 63-34 non-district victory over Canton on Tuesday night.

Jason Thomason led the victors with 22 points, while Tyler Townley tossed in 12 and Jake Tumey added 11.

CUMBY — Sulphur Bluff ran its season record to 7-1 with a 55-41 win over the Cumby Lady Trojans on Tuesday.

Dalena DiDonato fired in 14 points to lead the victors and Ann Dorner added 11.

Neely Hammond topped Cumby and all scorers with 17 points.

Cumby will return to action this weekend in the Sulphur Bluff tournament.

Lukas Huddleston, 16, of Celeste, passed away Feb. 26, 2020. A memorial service will be 2 p.m. Friday, March 6, at the First Baptist Church of Celeste with Jim Sherwin officiating. Coker-Mathews Funeral Home is handling the arrangements.

Lukas Huddleston, 16, of Celeste, passed away Feb. 26, 2020 at his home. A memorial service is scheduled for Friday, March 6, at 2 p.m., at the First Baptist Church of Celeste with Bro. Jim Sherwin officiating.