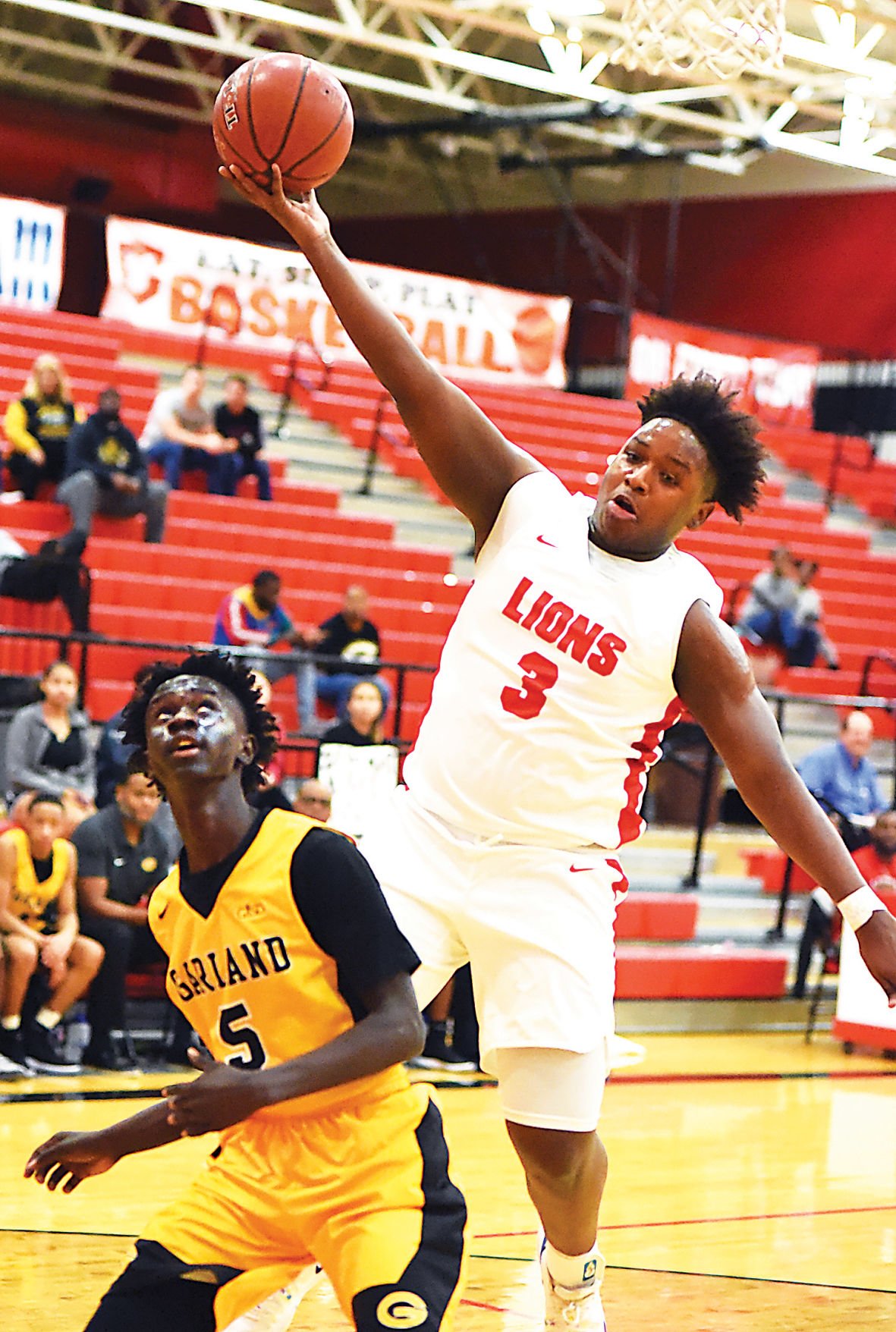 Quin Anderson keeps the ball up high as he takes it to the basket against Saeed Koko of Garland during the Greenville Lions’ home opener. 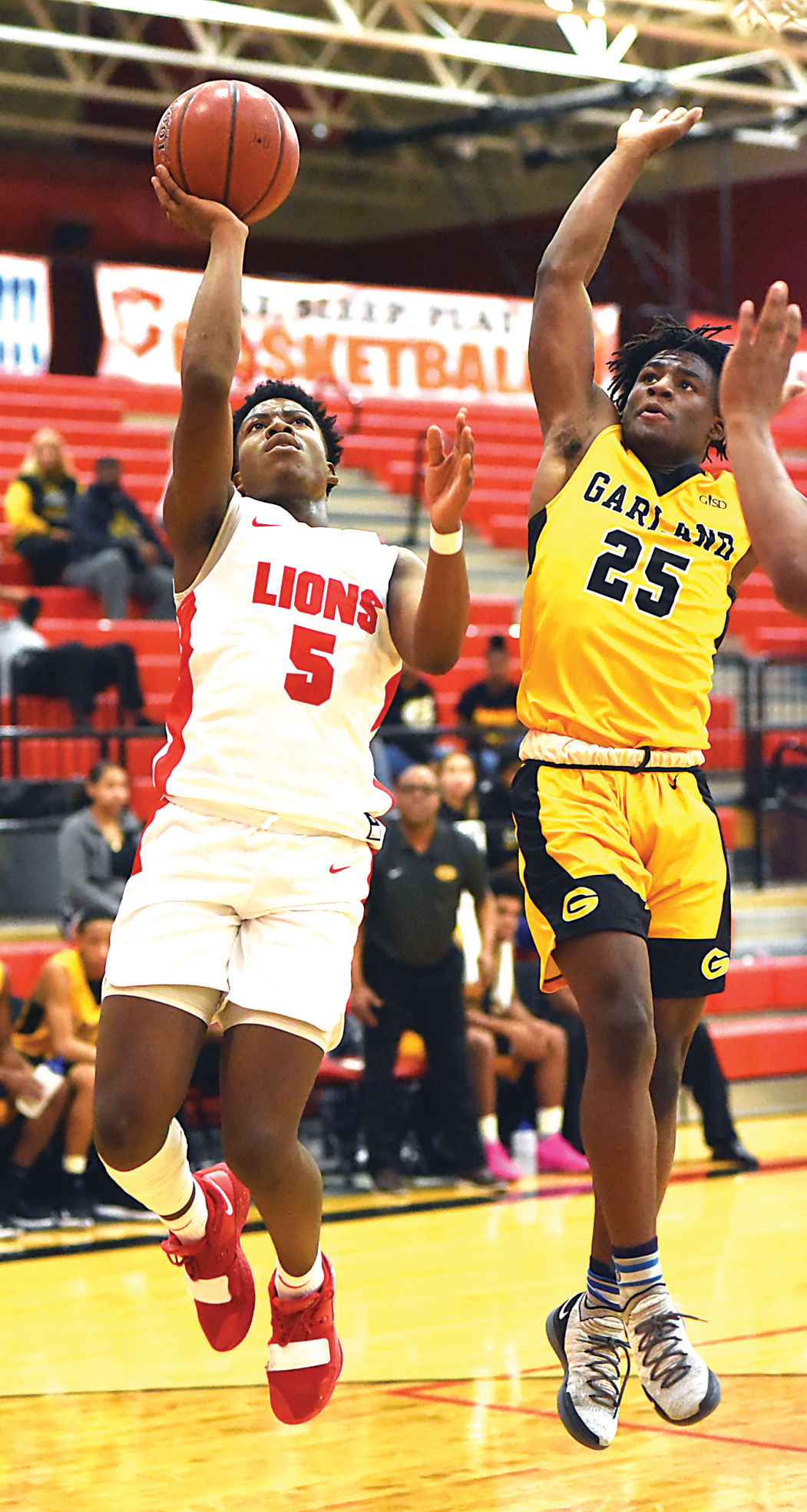 Kedrin Carter of Greeville lays up the ball as Jayshon Powers of Garland defends in the Lions’ first home game on Monday.

Quin Anderson keeps the ball up high as he takes it to the basket against Saeed Koko of Garland during the Greenville Lions’ home opener.

Kedrin Carter of Greeville lays up the ball as Jayshon Powers of Garland defends in the Lions’ first home game on Monday.

The Garland Owls spoiled the Greenville Lions’ home basketball opener, handing them a 71-44 loss on Monday night at the Lions Den.

Zuby Ejifor, a 6-7 sophomore, banked in 24 points to lead the victors. Aaron Kin added 12 points, while teammates Hugo Ejifor tallied 11 and Saeed Koko recorded 10. Garland is now 3-0 for the season.

Cameron Smith fired in 12 points to lead Greenville which fell to 2-1 on the young season. Quin Anderson added eight points for the Lions, while Jeremiah Abrego tallied six.

“We came out flat tonight and we gave up too many offensive rebounds,” said Greenville coach Chris Williams. “We didn’t shoot the ball well, but we did not give up. We played to the end. We had a couple of blocked shots.”

A late rally ran out of gas as the Greenville Lady Lions fell 57-34 to the North Forney Lady Falcons at the Lions Den on Monday in non-district basketball.

“They went up 31-5 in the second quarter,” said Greenville coach Erica Delley. “We came all the way back to get within seven points. Our offense got stagnant and they closed out the game.”

Azaria Mapps tallied 11 points for Greenville, while Maci Williams recorded nine points, all of them on 3-point baskets.

The Lady Lions remained winless for the season at 0-6.

COMMERCE — The Commerce High School Tiger boys basketball team bounced back from a season-opening loss on Friday to snag a 65-35 victory over the Class 4A Athens Hornets in the first home game of the season Monday afternoon.

The win is the first at Commerce for coach Roger Brown without his son Dodge Brown on the roster. Dodge was a two-time all-state selection, was named Texas 3A Player of the Year last season and finished his four-year period with the Tigers with 2,349 career points and 364 3-pointers. Dodge cheered his former team on at the game.

But Roger’s younger son Sammy, now a senior, took his turn to light up the scoreboard during the game against Athens. He finished with 22 points on 9-of-12 shooting, while also grabbing four rebounds and being credited with an assist. Both Jacorey Foster and Brad Caldwell finished with nine points off of the bench. Foster added five rebounds and an assist while Caldwell had six boards and one assist.

As a team, Commerce shot a pedestrian 39 percent, in large part to going just 4-of-17 from 3-point range.

Roger Brown said it was a good feeling to get the team’s first win at home.

“It feels really good to get this win,” Brown said. “But we have some tough home games coming up against Paris and Crandall where we will be the underdog, so we need to step it up still.”

CADDO MILLS — The Caddo Mills Lady Foxes ran their season record to 5-1 with a 56-40 home win on Monday over Kaufman.

The Lone Oak Buffaloes have dropped their first two games of the basketball season, falling 58-31 to Mabank on Friday and then 44-29 to Quinlan Ford on Monday.