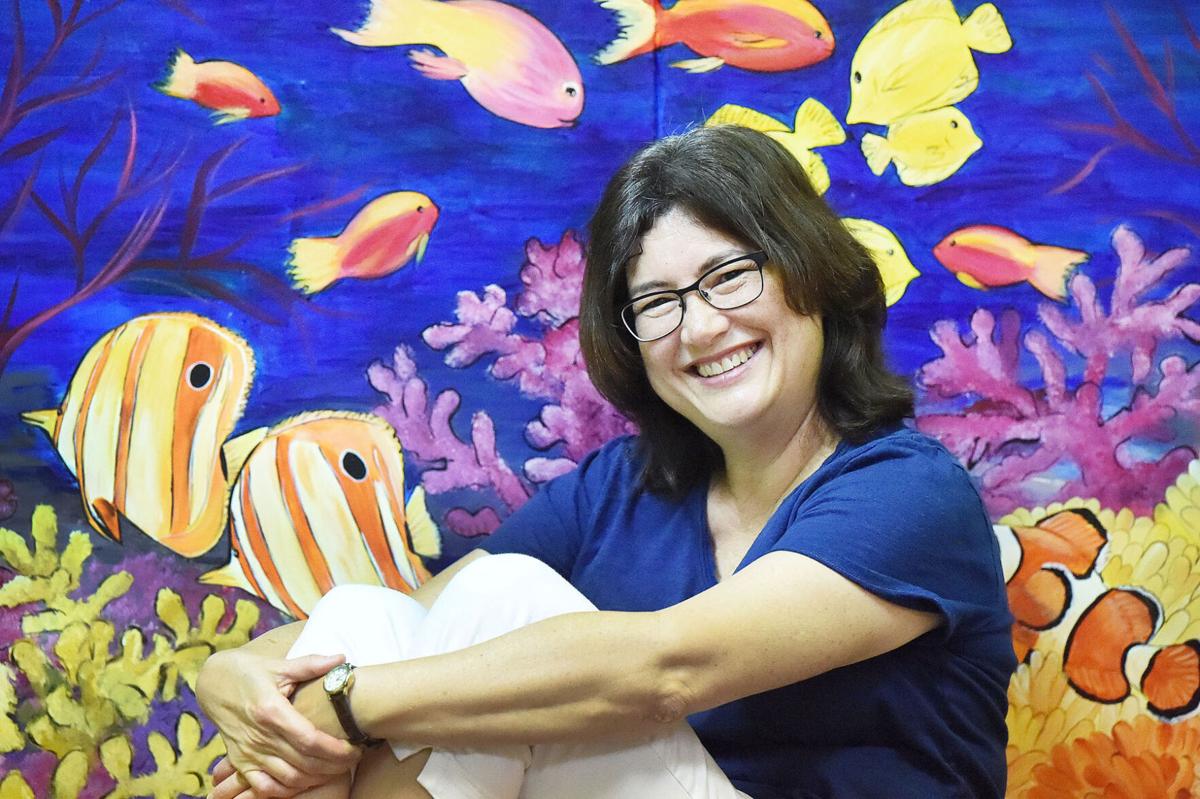 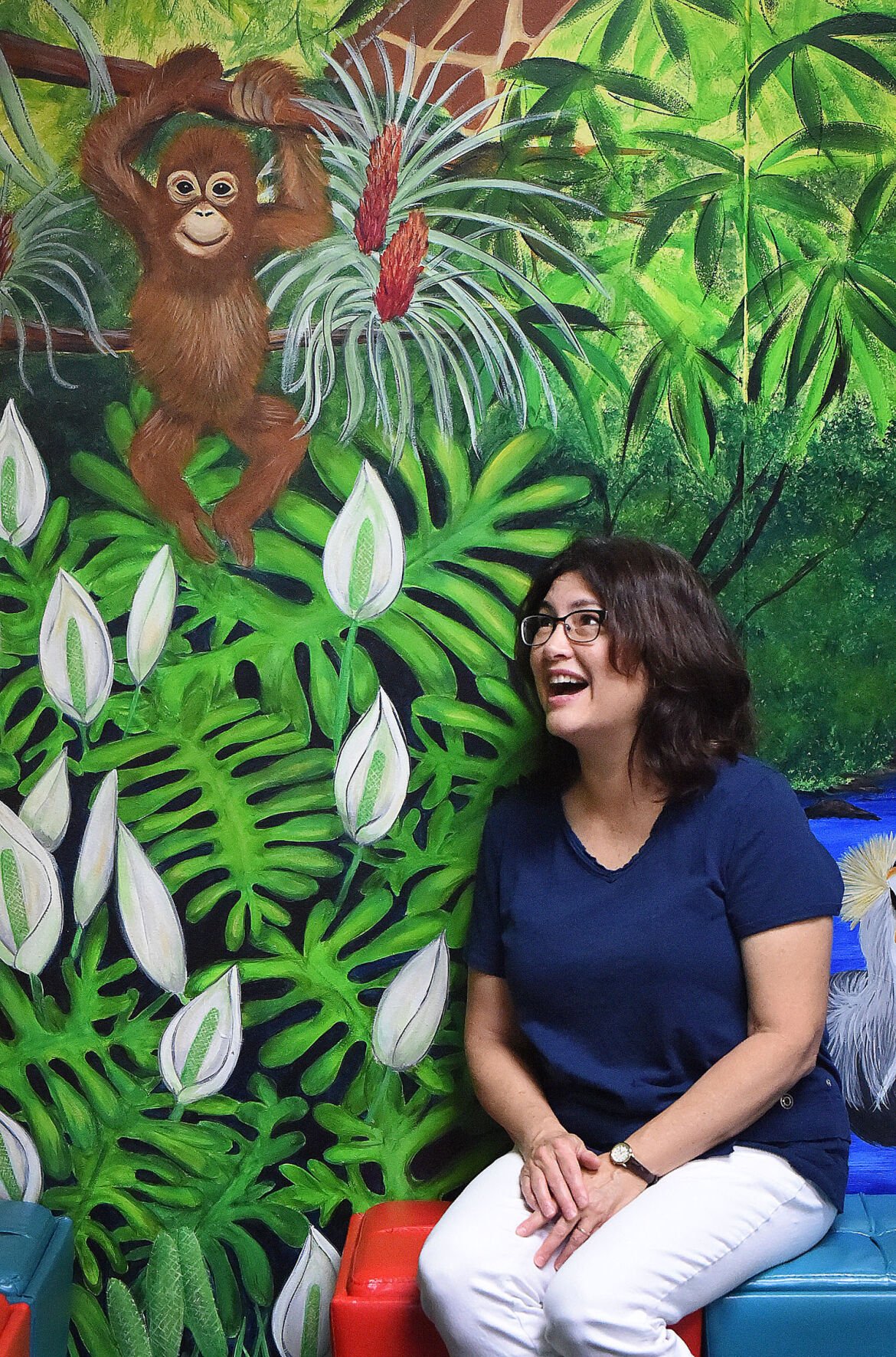 Elaine Yznaga poses with one of her murals.

Elaine Yznaga poses with one of her murals.

Editor’s note: This is Part 1 of a two-part story. Part 2 will appear in the Aug. 15 edition of Life & Leisure.

Where can you find flamingos, tigers, giraffes, exotic fish, otters, quokkas, sea turtles and an eagle?

These animals, along with many more creatures, are visible on the walls of the children’s area at Greenville’s Wesley United Methodist Church.

Elaine Yznaga painted these walls. It all started years earlier because she was involved with Vacation Bible School at Wesley UMC.

“For every VBS I painted a banner with a logo,” Yznaga said. “One summer,  Pastor Gene Wisdom noticed the banner, and he decided that I should be the person to paint the background walls surrounding the huge tree that he had built in the children’s area. I suggested trees for the background walls. He suggested a jungle. I realized that I had better up my game.”

Her first question concerned the look of the animals. Should the creatures be cartoon-like jungle animals or should they resemble actual jungle animals?

Leslie Dick, the director of Children’s Ministry at Wesley Methodist, decided that the creatures should resemble real animals, and Yznaga was determined to place each one in its actual locale.

“Elaine and her husband John have traveled extensively so she chose animals that are in their natural habitat,” Dick said. “I told her that the children probably wouldn’t know, but she insisted on the proper setting for every animal.

“Gene Wisdom and I had talked about making an area that would be inviting for the children. He built a tree out of styrofoam coated with some kind of concrete. Then Elaine painted it to look like a tree. Her part of the project just kept going on to other rooms and walls because Elaine’s painting was so good. Some people call the first area that she a painted the Jungle Room, but at the church we refer to it as the Kids Connections area.”

When Yznaga began her original task, she realized that more walls also seemed to need a fresh appearance.

“After I started painting the animals on two walls, I looked over and saw that another wall in the room looked awful,” Yznaga said. “I had a bunch of leftover sample pictures that I was not using for the two other walls. Then I began to find other pictures that would fit in with the jungle theme. I included a waterfall. I wanted to use capuchin monkeys, but they looked so fierce. My nephew studies capuchin monkeys and he showed me his website. I ended up superimposing happier faces on them so that they wouldn’t look so sour and mean. The animals included a lion along with adult and baby orangutans.”

“I was almost done with the first walls and that’s when I fell off the scaffolding and got hurt. It took a while to get over the injury. I finished the painting during the Christmas holidays in 2016.”

Another room had previously been used for the Kids Connections.

“They had a jungle-like mural in that room,” she said. “It had gotten old, and it wasn’t the same style, the same color scheme and it wasn’t as detailed as what I had done. The teachers said that they would prefer that I create a new mural instead of touching up the old one.

“It was a while before the room was ready for me to paint. In the meantime, I attended an Earth Day event in Dallas. The focus was on how the coral reefs were disappearing and how they needed artists to get people to pay attention to the problem. A vision came to me of a sea turtle. I had always wanted to do a half underwater and a half above water mural. The animals included the Australian quokkas, creatures that have naturally cartoon character faces. They look like they want to hug you. The painting also has a kingfisher with a small fish in his mouth, koalas and kangaroos.”

Because the church did not have a mural in a room that was dedicated to Sunday School, Yznaga asked Dick about creating a mural for that room.

“By that time, my husband and I had been on a trip with National Geographic to Alaska,” she said. “I was seeing all these creatures, and it was so cool. I had many  photos of the whales, the bears and sea otters. The whole mural was coming together in my mind, but because I thought that this area wasn’t really a rain forest, I didn’t think I could include these animals on a wall. But our naturalist guide said that this area of Alaska is really a rain forest, a temperate rain forest. Another naturalist took some colorful underwater photos, and I asked if I could use them. I found some others online.

“The mural is a big one, and it kind of wraps around a wall. My painting reflects my summer vacation!”

“In the painting is a jellyfish which was painted with glow-in-the-dark paint,” Dick said. “It lights up when the lights go off. There are also humpbacked whales, forests and mountains.

“Elaine has amazing talent. She uses her gifts to bless others.”

During March 2019, visitors were invited to attend the Mural Open House at Wesley UMC to see the wonders of the jungle, Australia and Alaska as created by Yznaga.

“The rooms are alive with the murals,” Yost said. “You really feel that you are transported to the places that show the jungle and underwater scenes. They are just so vibrant that you can almost visualize the actual animals and hear their sounds. You can tell that she puts a lot of passion into her work.”

Elaine and John Yznaga are known for their decades of service in the area. She is involved with Drug Free Greenville, the Audie Murphy American Cotton Museum, the Greenville Entertainment Series and the FIRST Robotics Robowranglers.

Next week: Part II Elaine Yznaga’s murals at Carver Elementary and at the West Tawakoni Library.