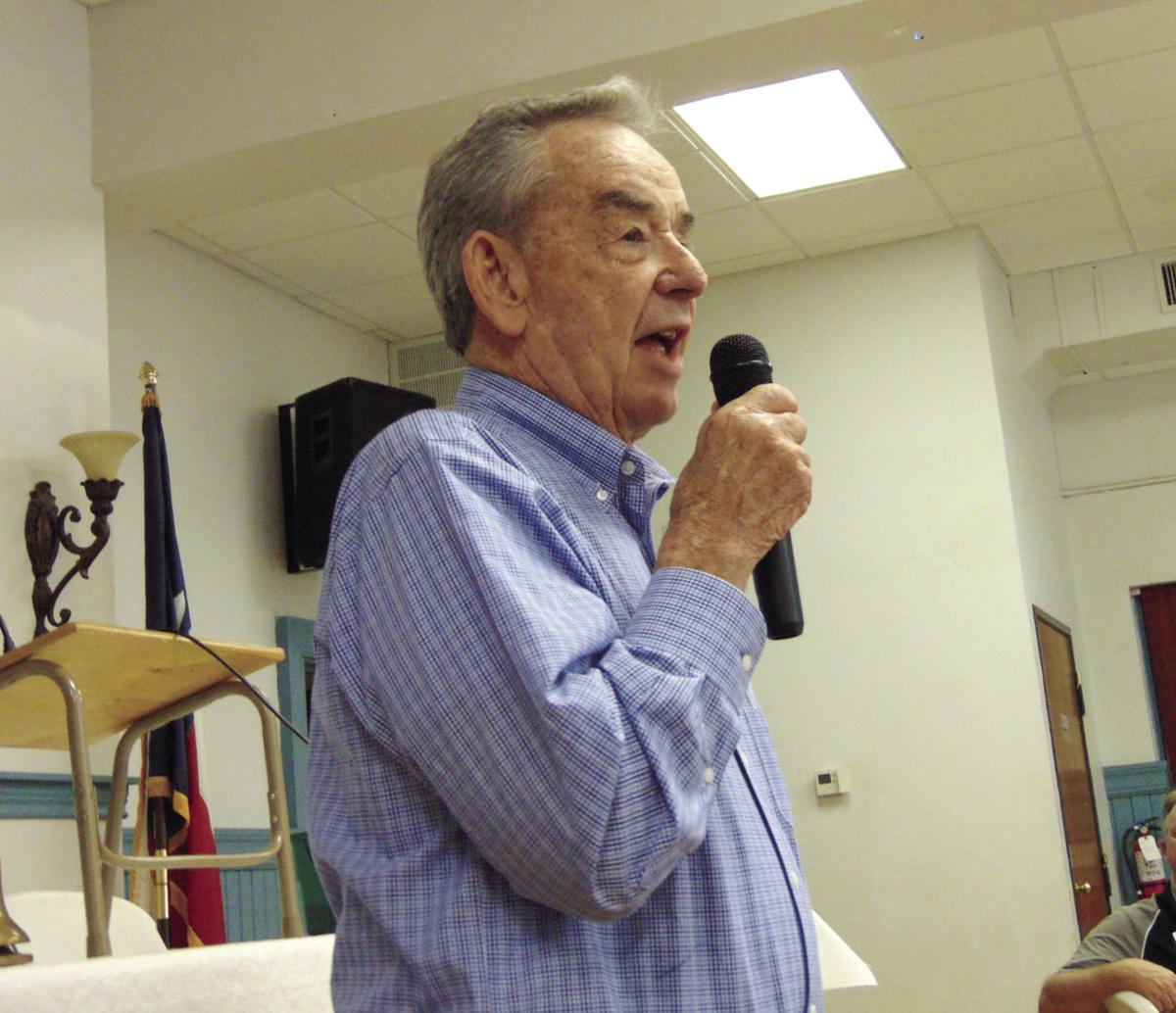 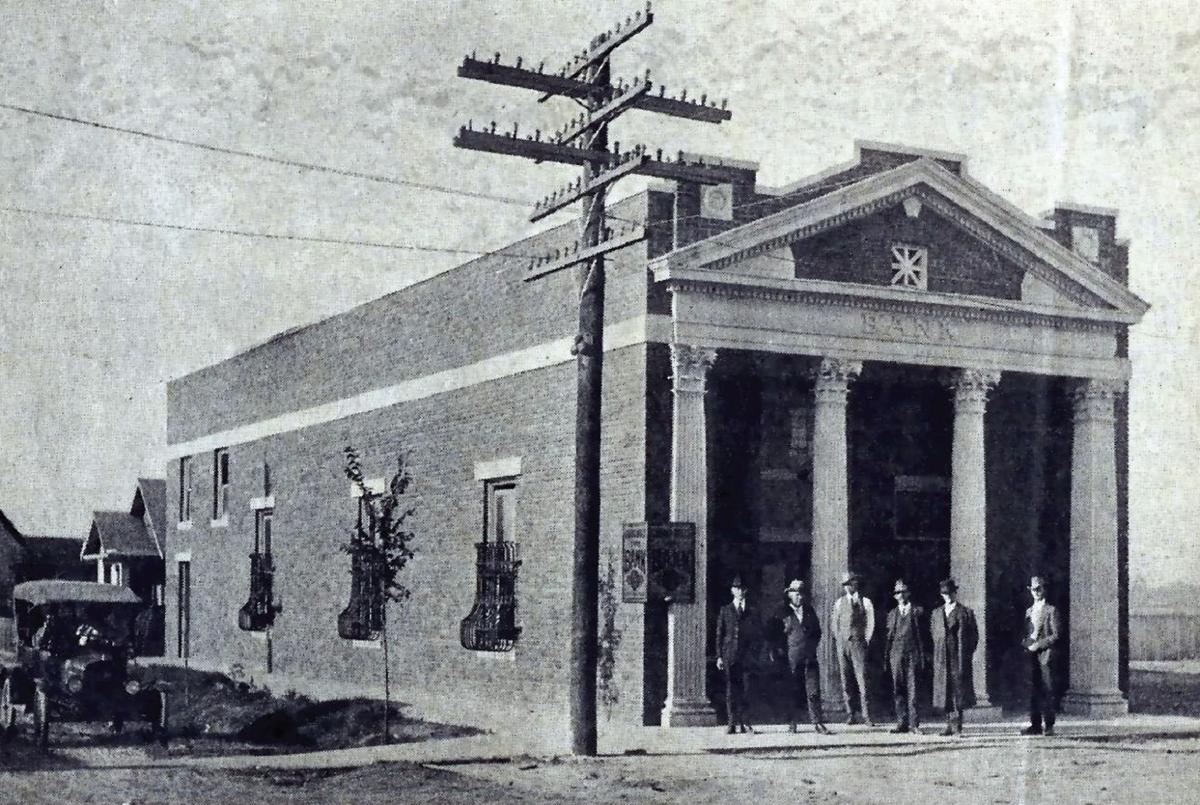 The former State National Bank of Caddo Millls was the scene of a robbery in September 1975. The building pictured was demolished, and a new bank building sits in its place.

The former State National Bank of Caddo Millls was the scene of a robbery in September 1975. The building pictured was demolished, and a new bank building sits in its place.

CADDO MILLS — It is an often-told tale, about the day in 1975 when the State National Bank in Caddo Mills was robbed.

It is a tale that involves gunfire, a kidnapping, crooked lawmen and a group of local residents chasing and tracking down the culprits.

Joe Johnson has been known to spin the yarn on occasion – seeing as he was there back then and was a member of the posse – and he told it again this week to the Greenville Noon Rotary Club.

Johnson stressed that his version only gives the details about what happened from his perspective, filtered through 44 years of memory, but he thinks it is a great story.

“What made the great Caddo Mills bank robbery of 1975 so unique was that it was lawmen who were robbing the bank,” Johnson said.

According to accounts from the Herald-Banner and the Associated Press, George P. Marshall, 30, of Garland and Tommy Lae Deal, 28, of Houston, were arrested in connection with the robbery. Deal was the former police chief at Webster, south of Houston. Marshall was a Dallas County deputy sheriff and former policeman in Webster.

A third suspect, by the last name of Morris, was an on duty Texas State Trooper based in Rockwall, Johnson said, indicating Morris served as an accomplice and getaway driver. The crew had their operation down to a science.

“Two of these gentlemen had robbed four banks before they got to Caddo Mills, and they all used the same method,” Johnson said. “They robbed small banks, in fact they robbed the bank in Royse City at one time.”

After casing a bank, the team would steal a car, and one of them would be posted out in the country.

“One of them would go in the bank, mask on, and he would yell and have everybody get down and he would clean out the teller’s cage real quick, he would get back into the car, they would go back to where they were going to meet and they would drive off, real slick ” Johnson said. “But, they picked the wrong town to come through to commit a robbery that day.”

“Caddo Mills was very quiet, as it was at that time, and this green Mercury comes into town,” Johnson said,

Jerry Woods was coming out of the bank at the moment the suspects decided to commit the robbery.

“Their first mistake was robbing the bank and their second mistake was not turning Jerry around and putting him back in the bank,” Johnson said.

Woods noticed that two men were wearing surgical gloves on their hands as they walked into the building.

“Banks at that time had a lot of different things that you could do, but I don’t think a urologist was going to be in the bank for them to go see,” Johnson said.

Woods watched as the two men pulled ski masks on their heads, then ran across the street and told Mayor Bobby Chapman the bank was being robbed. The two men then ran to Larry Bost's barber shop.

“At that time in Caddo Mills, there were a lot of farmers and a lot of ranchers and everybody carried a rifle,” Johnson said, including Woods and Bost, who kept one in his business.

By this time the two suspects were leaving the bank, when one of them noticed Bost aiming a 30.06 rifle in their direction, while Woods was perched a short distance away.

“And they said ‘Uh oh, we got trouble’,” Johnson said. The two men believed they needed a hostage and then abducted Sherri Johnson, 19, the bank's receptionist and daughter of its president, into the Mercury.

“And Larry blows the right front tire out, boom, and they’ve got problems,” Johnson said. “That was then one of them puts his pistol up and Larry thought he was shooting at him. I would too, because he shot a hole in the barber shop window.”

By this time, the bandits’ quick getaway plan had obviously not worked out and Johnson said a crowd had begun gathering near the bank, wondering what was going on, although the robbers were able to drive off on Main Street out of town and turn left onto FM 36.

“That was when Sherri, she told me, they began to argue over what to do about her,” Johnson said, as the accomplice who was still waiting did not have a mask on.

“But when they threw her out, they threw one of the pistols out on the ground,” Johnson said. “So, you can see how this is going on.”

A woman who lived nearby heard the commotion and observed the scene from her front porch, and was frightened as one of the suspects retrieved the pistol and fired it several times in the air.

“I firmly believe they weren’t trying to hurt anybody, they were just trying to get some space,” Johnson said. “Well, the posse had formed by this time.”

Johnson explained this is the part where he entered the unfolding drama, as he entered Caddo Mills after visiting a dentist in Royse City.

Unlike the present day, when individuals can instantly connect and transfer information using cell phones, people in 1975 kept in contact using a different form of communication.

Johnson heard about the robbery on the radio, which is when Bost told him to call the sheriff.

And, again, there was no “911” dialing back then, so Johnson entered a local feed store, grabbed a phone and dialed the operator, reaching an attendant at the former Southwestern Bell building on Wesley Street in Greenville, who promised to relay the message to the authorities.

Johnson spoke with Bost on the CB, who said the suspects were last seen on FM 36.

“FM 1565 was the next farm-to-market road west, so I got in my pickup in case they were headed to Dallas,” Johnson said, as he searched for a green Mercury with the right front tire shot out.

“Just as I get almost to the interstate, what do I see, headed down the service road,” Johnson said. “Bam Watson had the John Deere house at that time.”

Watson had both a CB and an early cell phone and relayed the information to the sheriff’s office.

Johnson watched as the suspects went left under the FM 1565 overpass across Interstate 30 and stopped in front of an abandoned building, one of the suspects carrying a gun and the other holding the bank bag.

By this time, the posse had come across the accomplice, who met them displaying his badge.

“And he began saying, ‘I’ll take care of this,’” Johnson said. Fortunately, the posse did not believe him and continued on.

An individual driving a Ford Mustang is confronted by the bank robbers, who unsuccessfully attempted to take over the vehicle, then missed a chance to capture a rural mail carrier from Royse City who had arrived upon the scene.

The suspects ran across a pasture, which is when the cavalry arrived.

“You have never seen so many darn cars and pickups in your life,” Johnson recalled. “Everyone of them had a pistol or a rifle that long. I almost got scared myself.”

“The dirt flew, the grass flew, the manure flew,” Johnson said. “I saw a pistol flying up in the air and money falling down.”

Johnson said the next 90 minutes were mass confusion as the witnesses dealt with sheriff’s deputies, until representatives from the Texas Rangers and the FBI began interviews at the bank.

The two robbers later implicated the accomplice, who was taken into custody the next day, in uniform in Rockwall.

“They pleaded a federal plea … and they got 25 years,” Johnson said.

Woods is still a farmer in Caddo Mills, Bost went on to become a deputy sheriff at the Caddo Mills Police Chief and is now a plumber.

Johnson, 85, admits that some of the details of the events may not be completely accurate four decades later.

“What I’m telling you is the way I remember it,” Johnson said.

The bank itself was later bought out and torn down, with the current BB&T bank in its place on Main Street.

“Nobody got hurt,” Johnson said, and the money was recovered, thanks to the efforts of Caddo Mills residents on a September morning in 1975.

Thelma Joyce Baldridge, age 91, of Greenbelt, Maryland, went to be with her Lord and Savior on Friday, Nov. 12, 2021. She was born Aug. 21, 1930 to the late Jesse Mark Henderson and Cora Maggie (White) Henderson in Caddo Mills, Hunt County, Texas. Joyce was an amazing seamstress, painter and…

Sorry, there are no recent results for popular videos.