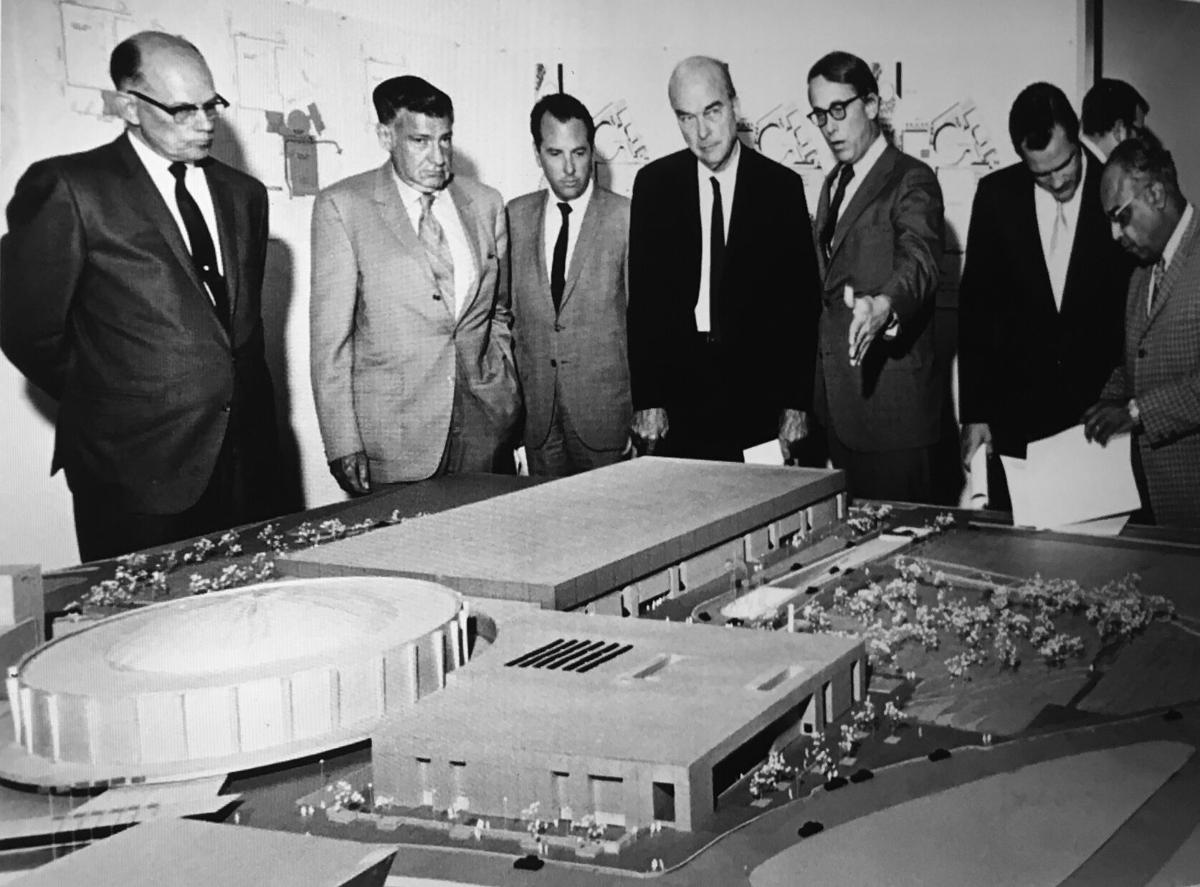 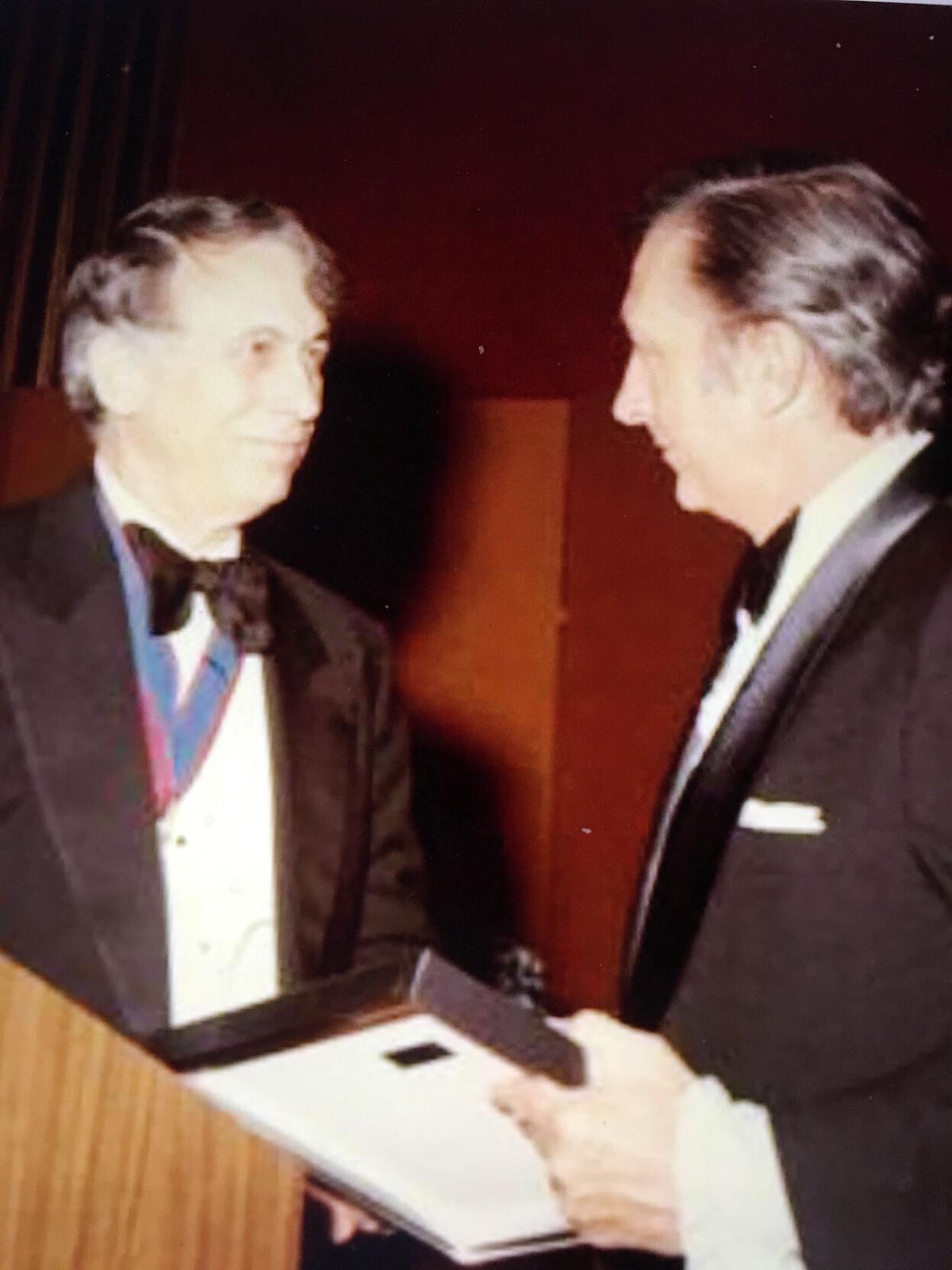 During his almost seven-decade career, Hamilton’s designs included the Republic National Bank building and tower, the Dallas Convention Center, the Fairmont Hotel and the A.H. Belo headquarters building. As a leading arts proponent on Mayor J. Erik Jonsson’s Goals for Dallas, Hamilton played a significant role in the creation of the Dallas Arts District.

Hamilton died in 2017 at the age of 97. His younger sister, Ann Hamilton Pippin, remains a Greenville resident.

“My brother E.G. was born at 3210 Oneal St. in Greenville,” Pippin said during a recent interview. “My grandfather, Martin Luther Hamilton, was the pastor at Wesley Methodist Church, and my dad, Earle Grady Hamilton, was also a Methodist minister in this area for six years.

“Before he became a full-time pastor, my father was a math teacher who preached during his summers off. Methodist ministers moved a lot, and we lived in Rockwall and Dallas before my father was assigned to a church in St. Louis, Missouri. Two little boys who attended my dad’s church in Rockwall grew up to be future District Attorney Henry Wade and longtime Texas Congressman Ralph Hall.”

In 1943, Hamilton graduated from Washington University in St. Louis with a degree in architecture. Then he entered the U.S. Navy where he served in the Pacific as an executive officer of a troopship which he took to the Battle of Leyte Gulf in 1944.

After World War II, Hamilton returned to America. In Detroit, Michigan, he worked for renowned Japanese-American architect Minoru Yamasaki, who was the designer of the World Trade Center towers.

“When I was 14, I had my best summer,” Pippin said. “I went to Detroit and visited Yamasaki’s estate. I got to go on trips to Canada with my brother and his family. It was a memorable time for me, and E.G. said that he learned so much from Yamasaki.”

In 1952, Hamilton moved to Dallas and joined the firm of Arch Frank, an innovator in Texas modernism. Next, he partnered with George Harrell on a project for Temco.

In the Summer, 2014 AIA Dallas Columns Magazine, architect J. Tipton Housewright wrote about 2013 Lifetime Achievement AIA Award-winning Architect Hamilton, who had been recognized for his exceptional work and for his contribution to architecture.

“For the Temco headquarters in Garland, E.G. and George Harrell used folded plate concrete technology, lending a modern and progressive image to the corporation that would eventually become Raytheon,” Housewright said. “The Temco project led to a partnership, and the firm of Harrell & Hamilton Architect Group was formed in 1956.”

According to Pippin, Hamilton’s friendship with Raymond Nasher led to their collaboration on North Park Center, an enclosed mall with an artistic and architectural vision. What had been a 97-acre cotton farm on Central Expressway became North Park in 1965. In creating his design, Hamilton was influenced by New York City’s Museum of Modern Art and 2015 marked the 50th anniversary of the award-winning landmark.

North Park Center received the American Institute of Architects (AIA) 1960s Design of the Decade Award for its integration of fine arts in a retail space.

Upon the architect’s death in May 2017, Dallas Morning News architecture critic Lamster wrote about Hamilton’s work on the Republic Bank and the Dallas Convention Center.

“Uncompromising dedication to his craft made Hamilton the architect’s architect,” Lamster said. “In downtown Dallas, he was the architect of the second Republic Bank tower, an extended version of the punched metal original building and a prime example of modern skyscraper design. He also oversaw the expansion of the Dallas Convention Center.”

Hamilton’s varied accomplishments included the design of the campus of Mountain View Community College, which was built on two sides of an arroyo and connected by bridges. He designed his notable three-story residence in Highland Park and many other architecturally significant houses.

In addition to his work at OMNIPLAN, Hamilton embraced civic duties.

“He was appointed by Gov. John Connally to be on the accreditation board for architects,” Pippin said. “He served as president of the Texas Board of Architecture Examiners in 1967.”

Hamilton’s sister also talked about his work on an important site in Geneva, Switzerland.

“He was commissioned by the United States State Department to design the United States Mission where the SALT II arms control conference was held,” Pippin said. “Bilateral talks took place between the U.S. and the Soviets.

“I’m very proud of my brother. I thought he was very special. Throughout his life he was always very kind to me. He was born in 1920, and he would have been 100 this year. He was a pioneer in his profession.”

Curtis Glenn Scott, 69, of Greenville, passed away on Wednesday, Jan. 13, 2021 at the Hunt Regional Medical Center. Due to COVID-19 and the restrictions, the family will be having a private family service and a Celebration of Life service will be held at a later date. Curtis was born April 3…