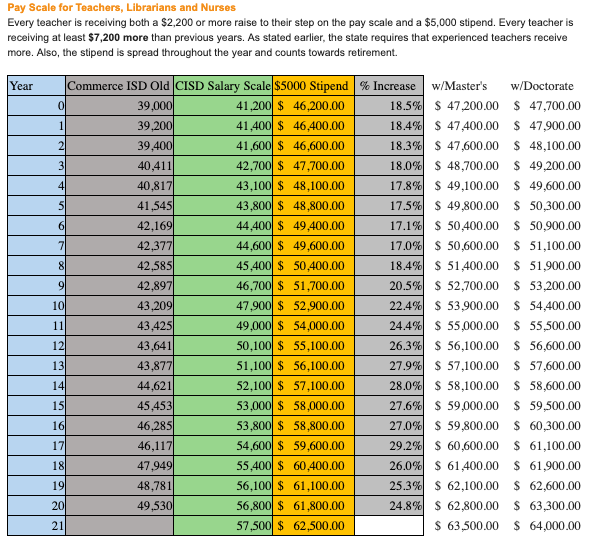 The updated pay scale included in an email to district employees Friday.

The updated pay scale included in an email to district employees Friday.

COMMERCE —The Commerce Independent School District Board of Trustees met in a special called session Friday morning, where they approved significant raises for all district employees.

Board members Randy Starks, Gabe Wittkopf and Dr. Mark Reid were not in attendance, but there were still enough members to constitute a quorum and call for a vote.

The present board members unanimously approved pay raises for all employees, a result of recent state legislation that increased school funding for that purpose. CISD Superintendent Charlie Alderman said that the district would be receiving an estimated 19 percent increase in state funding.

An email was sent to district employees Friday morning that detailed the raises.

According to this email sent by Alderman, CISD was in the bottom 10 percent of all Texas school districts in regards to state funding per student. The email also said that the decision was made to increase pay instead of hire more positions.

The pay raises are significant. The email states that 62 percent of the additional money received from the state has gone into pay increases, more than double the 30 percent required by House Bill 3, which was passed earlier this year.

Alderman’s email goes on to stipulate that much of the raises come in the form of a $5,000 stipend, which every teacher receives.

This is because, as Alderman says in the email that “many of the experts in school funding say that the state funding increase is not sustainable. With this knowledge, we wanted to ensure that all employees could receive the maximum amount while still protecting the district from possible layoffs” if funding dries up.

In addition to the $5,000 stipend, all teachers, librarians and nurses are receiving at least a $2,200 raise, with employees with more years of experience receiving higher percentages. A starting salary for a teacher in CISD will jump from $39,000 to $46,200 with the raise and stipend, an increase of 18.5 percent. Employees with Master’s or Doctoral degrees will see even more in yearly income.

In addition to the large raises for teachers, all nonexempt staff such as bus drivers, aides and maintenance workers will receive a flat 15 percent raise, which is 7.5 times more than usual. All administrators also receive the $5,000 stipend plus a two percent raise in pay.

The email closes with Alderman giving credit to the board.

“If you see a school board member, please tell them thank you! They have spent multiple meetings and many hours working to ensure that Commerce ISD employees could receive the maximum amount possible,” Alderman said. “All of you deserve this and our appreciation.”

In an interview with the Commerce Journal, Alderman stressed the point that no tax increases will come to local residents as a result of the raises.

“This is all from state funding,” Alderman said. “This isn’t something coming out of our tax revenues.”

Alderman also said that this was the best way to show how important teachers are.

“The teachers definitely deserve it,” Alderman said. “This is also a way to retain what we have and increase our number of applicants.”

The raises go into effect for the upcoming 2019-20 school year.

In other business at the meeting, the board voted to table measures regarding the superintendent’s annual review and compensation discussion until a later meeting when all board members could be present.

Jeanie Putman, a CISD alumnus and current teacher within the district, was appointed by the board as the new assistant principal at A.C. Williams Elementary School. Putman is replacing Tina Bronson, who is now the principal at Commerce Middle School.