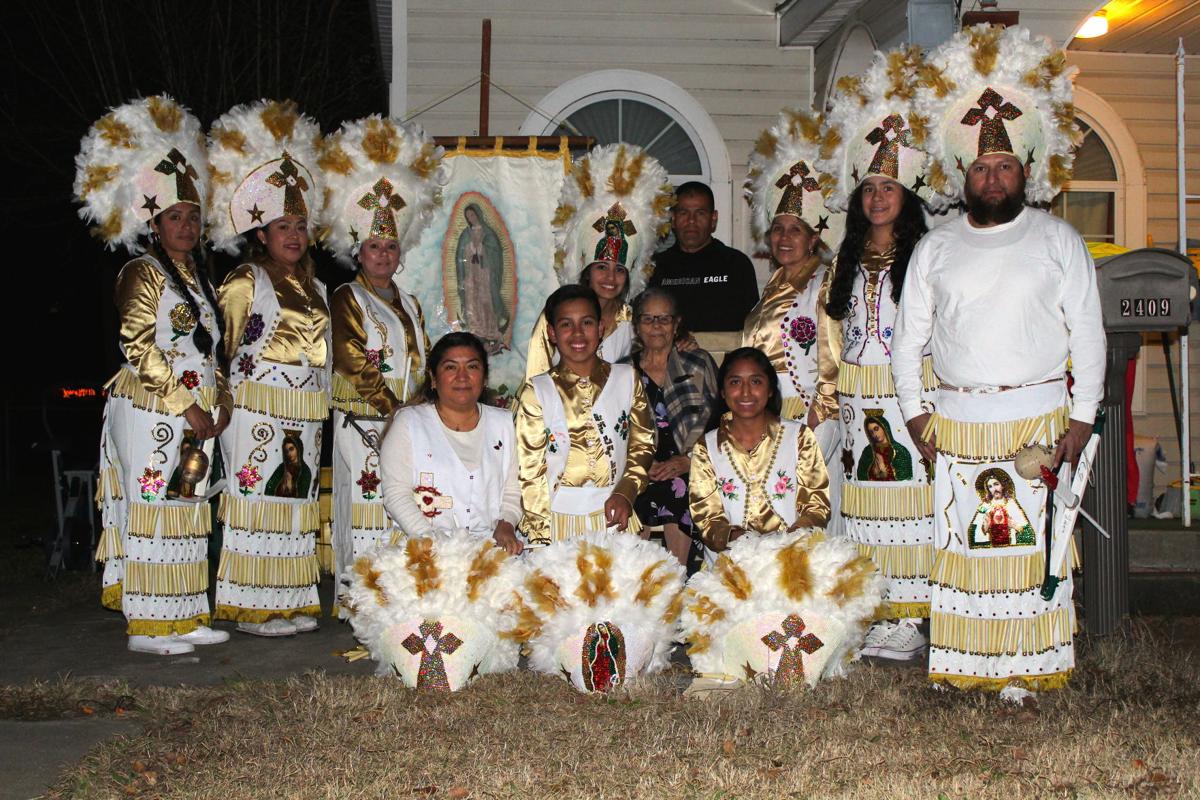 Pictured are several members of Danza Guadalupana de San Guillermo. The 25-year-old Greenville dance group is keeping alive a centuries-old Mexican tradition by performing every year throughout North Texas. This year, they have about 20 performances lined up throughout December with three of them today in the area. 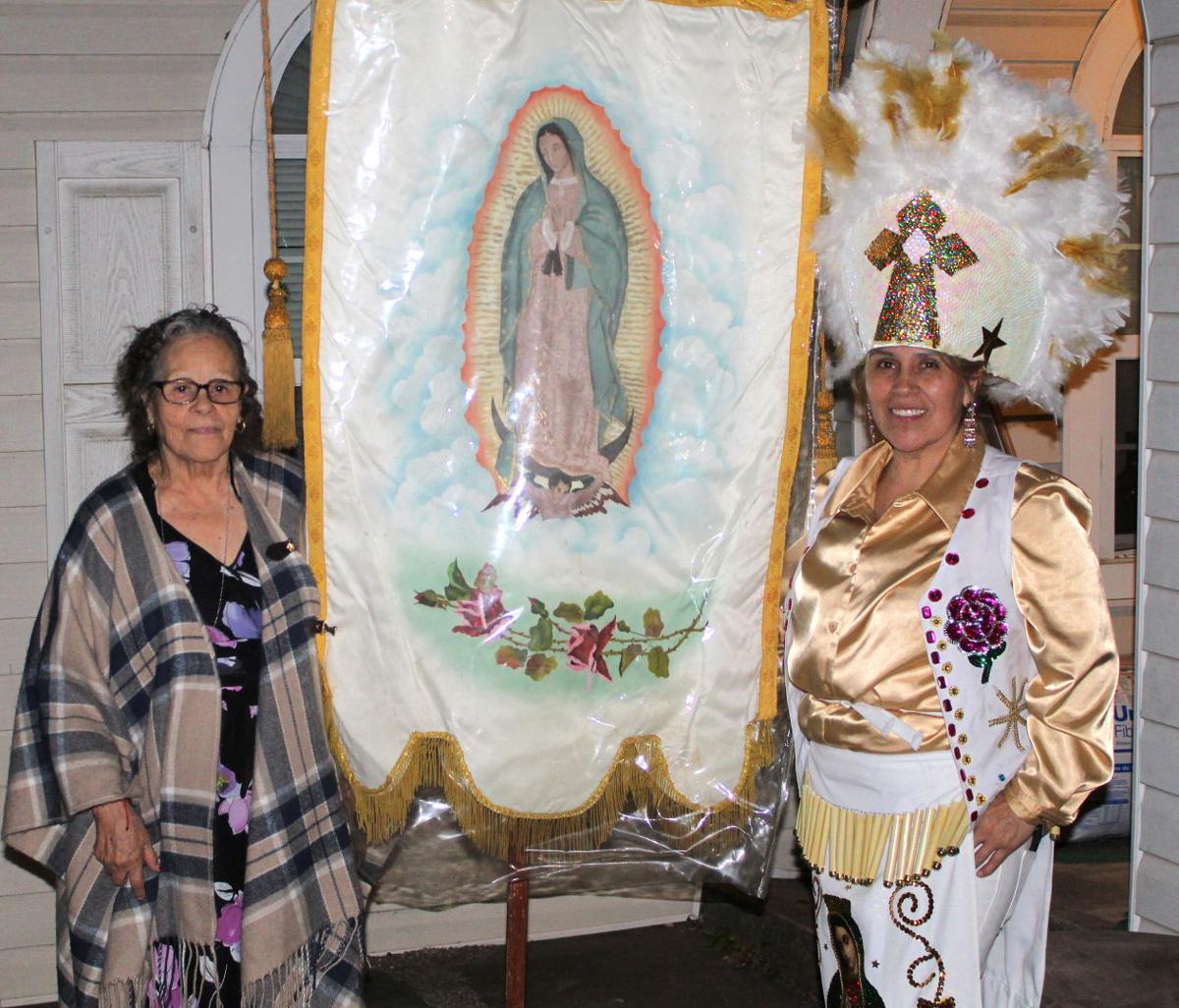 Maria de Jesus Galvez Salazar de Carrillo and her daughter Maria Guadalupe Hernandez helped start the group, along with the late Luis Carrillo-Rodriguez - Hernandez’s father and Carrillo’s husband. The banner of La Virgen De Guadalupe pictured is more than 60 years old and was brought from Mexico.

Pictured are several members of Danza Guadalupana de San Guillermo. The 25-year-old Greenville dance group is keeping alive a centuries-old Mexican tradition by performing every year throughout North Texas. This year, they have about 20 performances lined up throughout December with three of them today in the area.

Maria de Jesus Galvez Salazar de Carrillo and her daughter Maria Guadalupe Hernandez helped start the group, along with the late Luis Carrillo-Rodriguez - Hernandez’s father and Carrillo’s husband. The banner of La Virgen De Guadalupe pictured is more than 60 years old and was brought from Mexico.

A centuries-old Mexican Catholic tradition that found its way to Greenville 25 years ago has been kept alive by local residents, as the group Danza Guadalupana de San Guillermo practices and performs on an annual basis every December throughout the North Texas area.

The “matachines,” the name given to a group of dancing members in this type of group, perform an elaborate dance sequence of steps, hops, squats and spins to the beat of a drum as part of the religious dance ritual honoring the patron saint of Mexico, the Virgin Mary - La Virgen De Guadalupe.

“We do it because it’s our tradition, to pay respect to the Virgin, and to represent the church,” Maria Guadalupe, who goes by Lupe, said. “But overall, it’s for La Virgen. She is the base for which we are even dancing. She is our representation as matachines and for the church.”

Danza Guadalupana is noticeable at events because of its members’ brightly colored and decorated costumes. They are made up of a head dress called a “penacho,” and “nagüillas” covered in sequins, beads, images the Virgin Mary and bells that jingle with every step the matachines take. The costumes are sent to them from Mexico mostly assembled and each member adds their own touch, making every costume unique.

Each member of the group dances for his or her own personal reasons, but it’s considered an act of faith and devotion. In the case of matachín Nancy Fraire-Acosta, the dance was originally a petition to God, through the Virgin Mary, asking for the wellbeing of her son while she was pregnant with him. Fraire-Acosta said her doctor warned that her son would be born with a certain condition, making it difficult to care for him. So, she made a petition asking the Virgin Mary for a healthy pregnancy and birth.

“I asked Lupe if I could dance while I was six months pregnant and she accepted it but told me to be very careful because I was pregnant,” Fraire-Acosta said. “I told her I needed to dance because I had made the petition, and thank God my son was born healthy and all of my kids are healthy. I’ve been dancing for two years now. They were telling me I should abort my son, but I would never consider it.”

In other cases, like that of Priscilla Carrillo, being part of the group is something she and her siblings have done because her father, Alvaro (the drummer for the group), and Aunt Lupe helped start Danza Guadalupana.

“I’ve been doing it for 20 years, and I’m 24,” Carrillo said. “When you’re dancing you feel like - I remember two years ago when I was dancing at the church I was very emotional because of everything that had been going on in my life. And thinking of La Virgen and the prayer we were offering by dancing; it just felt amazing and touching at that moment.”

The annual celebration takes place on Dec. 12, the day on which - according to tradition - the Virgin Mary appeared to the indigenous man Juan Diego in 1531. Lupe and the rest of the matachines, nearly 30 of them, come up with and practice different dance routines starting in August and rehearse between one and three times a week in preparation for the event.

“Before we started the group 25 years ago, when we would celebrate, we’d go to the church and it’d be quiet and dark - with really nothing going on and even kind of sad,” Lupe recalled. “And when we started this it brightened up the day and the celebration. It’s our culture and has Mexican roots.”

Alvaro added that wherever they go people usually offer them a “reliqua,” a traditional Mexican food prepared by the host and given to the group as a “thank you” for dancing at their celebration, since the group doesn’t charge and voluntarily performs.

“We also go dance where they invite us because they feed us,” Lupe said jokingly.

The Greenville group will perform for the public on Thursday, Dec. 12 at St. William the Confessor Catholic Church in Greenville, 4300 Stuart St., before mass at 5:30 p.m. and after mass at about 7 p.m.

Christian Aleman is a reporter at the Herald-Banner and a senior journalism student at A&M-Commerce. He is co-editor of the award-winning student newspaper and has spent summers working at several major news organizations. Christian graduates in May 2019.

Tawanna Kay Pumphrey, 55, of Quinlan, TX. passed away Jan. 18, 2020. Visitation was at Lynch Funeral Service in Greenville on Jan. 20. Funeral service is at Grace Baptist Church-Quinlan, TX on Jan. 21 at 2 p.m.