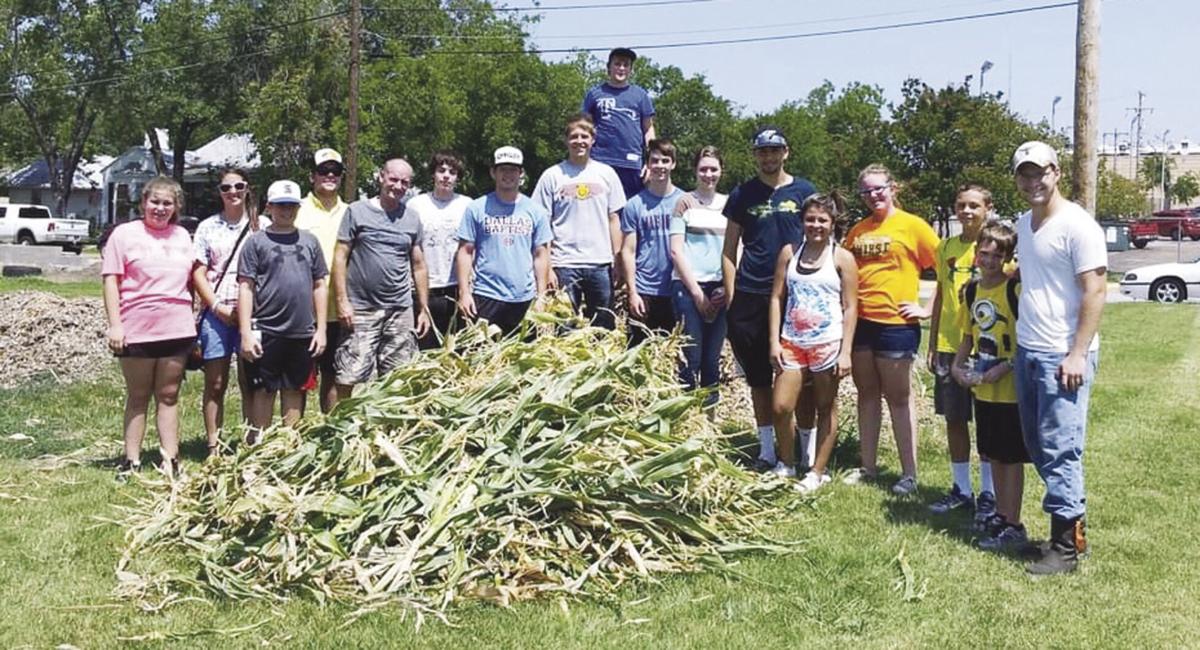 It’s easier to convince your kid to eat vegetables when he took part in growing the cabbages, carrots, spinach, beets and sugar snap peas.

Although it’s not really a new thing, the community/urban garden has been reimagined during recent times. In Greenville, two such gardens exist — The Hunt County Shared Ministries Community Garden and the Christ Community Church Gardens.

Sherry Hall, a founder of the Christ Community Church Gardens, describes the community garden as a new kind of Victory Garden.

“A neighbor gentleman, who actually had a Victory Garden during World War II, keeps his eye on our community garden,” Hall said. “It seems that the new buzz word is ‘Victory Garden 2.0.’ As  the pandemic continued, people had free time at home. The community garden gave them a chance to plant and share with their neighbors.”

“Urban farming has been going on for more than a hundred years,” Dr. Williams said. “Well over half the people of the U.S. live in urban areas now. COVID was an eye-opening event worldwide. The way we access our food became very important when we were not able to find food such as vegetables and eggs on the store shelves. The pandemic has inspired many to become home gardeners or community gardeners. This kind of farming has become a phenomenon.

“The demand for locally raised farm products skyrocketed during the pandemic. Small scale organic or just regular farmers found their produce in demand.”

Within a large city such as Dallas, urban agriculture has been struggling from a lack of places to plant.

“In Dallas, some city ordinances have been changed to make people able to have community gardens and school gardens,” Williams said. “Urban gardening faces challenges in finding the space to garden or being able to keep the space for more than one growing season.

“The perimeter of Dallas used to be all farmland. Now they are “farming houses” instead. It’s a lot more profitable to farm houses than to farm vegetables. As the population continues to sprawl, it’s getting harder to find places to grow so we have rooftop gardens and parking lot greenhouses. In Texas it’s mainly school gardens, backyard gardens and individual gardens.”

Some urban areas have established Community Supported Agriculture or CSA, .

“In CSA, you pay a membership fee at the beginning of planting season,” Dr Williams said. “Then as the harvest season comes along, you get a share of the harvest as part of your membership. You pick up produce boxes from a local produce grower.”

When the Hunt County Shared Ministries (FISH) Community Garden was established, it allowed people to rent gardening spaces while saving a larger plot so that FISH volunteers could farm and supplement its pantry with the harvest. The renters maintain their spaces from planting to harvest.

Adam Beene is in charge of the community garden at Hunt County Shared Ministries at 2805 King Street in Greenville. For a minimal fee, individuals or groups can rent space to grow their own produce.

“We now have our second garden,” he said. “The original was on the side of our building where we wanted to expand. We had to move the garden behind our building. It’s in a better location now and it’s closer to our greenhouse. Also, we have more space than we did with the first garden.”

The Executive Director of the nonprofit Hunt County Shared Ministries, Wally Jeffers, began the community garden as part the FISH mission of providing food and numerous other services as a “safety net” for Hunt County residents.

“Wally just loves plants and has a green thumb,” Beene said. “While I don’t have that natural ability to grow things, I still manage the garden with the help of many volunteers.

“We have 40 plots right now and a pretty large greenhouse. We charge $15 to rent a spot during a growing season. If we don’t sell all the spots, we plant food for our clients there.  We fill those up with something bulky like onions or mustard greens. Then when we’re doing the food distribution, we add that produce.

“We give out quite a bit of produce which comes from the grocery stores, and then once a month we have a produce distribution coming from the North Texas Food Bank. It’s a bonus when we are able to grow and to give out some fresh produce from our garden.”

While groups of volunteers have always been essential to the community garden, Beene would like for more school groups to come and use the garden spaces for educational purposes.

“We do have one special education group of students from Commerce High School who regularly  come to work in the garden,” Beene said.

“The second garden just became fully functioning last year. It is getting prepped now, and we need to get water to the new boxes which we built and filled with dirt. Every Spring volunteers get the garden ready for planting.”

The Christ Community Church Gardens are located behind the church.

“We started the garden five years ago,” Hall said. “We don’t advertise, but we put out signs after we grow our crops and are ready to give our produce away. We do this every week on Saturdays during the growing season.

“In 2016, our pastor came up with the idea of growing stuff to give away. I knew a little bit about community gardens, and I told him,’You know it’s a thing, right?’ He answered, ‘No.’ Although I didn’t have a lot of knowledge, I had the time and the passion to work with other volunteers on the project.

“The soil is the cotton-growing blackland. We had the soil tested at Texas A&M and found that the pH was perfect, neither too alkaline or acidic. Every year the garden gets richer and more nutritious, and the harvest gets better and better. We have all raised beds except for the area where we grow okra.

“The last three years we’ve had a weeklong summer camp for 5 to 11-year-olds. It’s kind of a Vacation Bible School with a naturalist bent to it. Kids are able to do nature studies and see where the food comes from and why it’s important to take care of the butterflies. Also, our youth get involved and do a project for the garden every year. People from the community also get involved.  They donate seeds and transplants..

“We wanted to be a part of our neighborhood, and we wanted to meet needs through the resources that we have.”