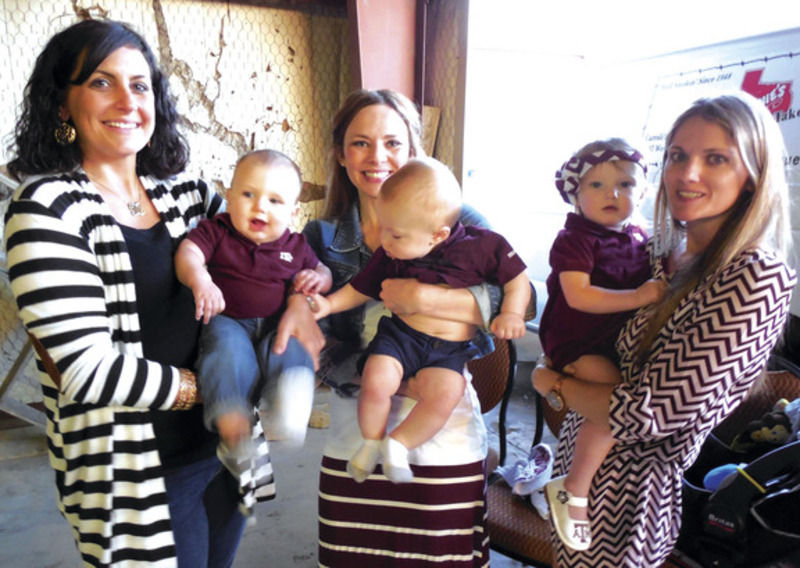 Three future Aggies attended Muster with their parents Tuesday evening. From left are Zain, held by his mother, Mandy Stewart-El Zorkani; Graham, with his mother, Julie Barnard; and Kynsleigh, held by her mother, Candace Barnard.

Three future Aggies attended Muster with their parents Tuesday evening. From left are Zain, held by his mother, Mandy Stewart-El Zorkani; Graham, with his mother, Julie Barnard; and Kynsleigh, held by her mother, Candace Barnard.

The Aggies of Texas A&M University have an abundance of time-honored traditions which have been observed for decades by both current and former students.

One of the most memorable is Muster, observed each year on April 21.

This past Tuesday evening, a group of 90 Aggies, family members and friends gathered in Greenville, joining in spirit with hundreds of Aggies throughout the world in the annual celebration. The event was sponsored by the Hunt County A&M Club and held this year at Ernie’s Pit Barbecue, owned by  a local Aggie, Howard Barrow.

The American Heritage Dictionary defines the word “muster” as “a gathering, especially of troops, for service, inspection, review, or roll call.”

In Aggie terminology, Muster is a special time set aside to honor members of the Aggie family. More than a ceremony, it is a responsibility handed down from one generation to the next as a way of renewing their loyalty to their school and their friends.

At Muster, a Roll Call for the Absent in conducted, honoring Aggies who have died since the last Muster roll was read. As the names are called out, a friend or family member answers “Here,” and a candle is lit to symbolize that “while those Aggies are not present in body, they will forever remain with us in Aggie spirit.”

And then, because camaraderie is a strong part of their tradition, the sombre ceremony is followed by a social hour with food, laughter, predictions for the coming football season, and recollections about the time on campus.

Muster’s history goes back to the 1880s when Aggies began to gather to relive campus memories. By 1901, it had evolved into a celebration of Texas Independence on San Jacinto Day, April 21, and in 1922 April 21 became the official day.

The March 1923 edition of “Texas Aggie” urged, “If there is an A&M man within one hundred miles of you, you are expected to get together, eat a little and live over the days you spent at the A&M College of Texas.” By 1929 Aggie Muster meetings had spread throughout the world.

In 1942 Muster gained international recognition when 25 men, led by Maj. Gen. George Moore (Class of 1908) mustered during the Japanese siege of the Philippine Island of Corregidor. Despite the fierce fighting as the Japanese laid siege to the island, Moore held Muster, calling the names of each of the Aggies under his command. Only 12 of the 25 survived the battle and the POW camps to which the survivors were sent.

On Easter morning 1946, General of the Army Dwight D. Eisenhower was keynote speaker at the Kyle Field Victory Homecoming Muster. He said, “No more convincing testimony could be given to the manner in which the men of Texas A&M lived up to the ideals and principles inculcated in their days on the campus than the simple statement that the Congressional Medal of Honor has been awarded to six former students, that 46 took part in the heroic defense of Bataan and Corregidor, and that nearly 700 are on the list of our battle dead.”

Today Muster is celebrated  in more than 300 places throughout the world, in addition to the massive celebration on the campus in College Station.

Observation in Hunt County began about 1966-67 and continued off and on until 1986 when it became an annual event, according to Douglas Felps (Class of 1962).

“Muster is special for Aggies and among the best of our many traditions,” said retired pediatrician Dr. Mike Adkisson (Class of 1951). “One of my most memorable was the on-campus Muster in Reed Arena which honored my graduating class on our 50th anniversary. My popular college roommate of four years had passed away the previous fall, and I (along with many others attending) sent a loud “HERE’ when his name was called, followed by a 21-gun salute by the Ross Volunteers. How loud and commanding that was in the confines of a gymnasium. Other meaningful Musters for me include answering for my lifelong childhood friend, Joe Rutherford; my brother, Jay; and this year, my nephew, John Adkisson.”

Veterinarian Dr. Larry Kimberlin ( BS 1981, DVM 1982) recalls a lighter but equally memorable Muster moment while in school. “One of my vet school professors, Charles Hall, came to be our speaker. It was special to me because I really respected him, and he brought with him a retired Reveille.”

(For readers unfamiliar with Reveille lore, an Internet article explains that Reveille is the official mascot of Texas A&M University. Students adopted the first Reveille, a mixed-breed dog, in 1931. Eight years after the first Reveille died, a graduate of the university donated a Shetland sheepdog to be the second official Aggie mascot, Reveille II. The third Reveille was the first to be a purebred collie; all subsequent mascots have belonged to this breed, and all are female. The current mascot, Reveille VIII, has served since August 2008.)

“Muster is one of my favorite events,” said Kimberlin. “It embodies what Aggies are all about, remembering those that have come before them and training those that will come behind in what A&M represents — honor, respect, pride and loyalty to God, family and country. I used to try to take off the day of bonfire and drive my kids down to College Station to see that event — and to get them ready to follow me down there,” he added. “It worked — I will graduate my second with a DVM degree next May.”

Becoming an Aggie is also part of the Barnard family tradition. “I am a first generation Aggie who had no direct contact with Texas A&M until the fall of ‘67 as a senior in high school,” said Bob Barnard (Class of 1972). “I attended the A&M-Baylor football game that fall and sensed that there was something special about A&M and the loyalty to the school that appealed to me. I enrolled in the fall of ‘68, and it has been a major part of my life and that of my family since that time. I first attended Muster in the spring of 1969 and was moved by the whole experience of remembering in such a solemn and respectful way those that had come before us.

“Reba and I have three sons: Chris (A&M ‘02), Robbie (Tarleton ‘06) and John Mark (A&M ‘08),” he continued. “They were taken on campus as 2-year-olds and have been attending all things A&M their entire lives. Chris was a sophomore in the fall of ‘99 when bonfire fell. He had actually been working up on ‘stack’ just a few hours before it fell. That day had an impact on all of us and drew the Aggie community closer than ever before. The memorial service in Kyle Field a few days later and then Muster in April of 2000 were two of the most emotional events of my life. Texas A&M was changed forever by losing bonfire (it was equal to Muster as a tradition), yet brought closer together by the outpouring of support after the tragedy.”

Chris Barnard commented that he has been attending Muster in Hunt County for more than 10 years. “My first experience with Muster was April 21, 1999. I was a freshman at A&M and lived in G.F. Moore Hall (named after Maj. Gen. Moore who led Muster on Corregidor during WWII). During this time on campus there was a tremendous amount of dorm pride and competition between each dorm. This carried over to getting as many dorm students together as possible to walk over to Reed Arena for the campus Muster ceremony, and it was a very eye-opening experience — honoring our past, our fallen, and Texas Independence. It embodies the Aggie spirit and makes me very proud to be an Aggie.”

“Muster is one of several traditions at A&M that for me carry respect and reverence,” added Howard Barrow (Class of 1981). “The origins of Muster during wartime to give honor to those Aggies who had passed still resonates today. What is really amazing is that Aggie Muster is held all over the world and in some strange and remote places. It is a special time to remember others while enjoying the company of good Aggies.

Barbara Glenn, 72, of Greenville, passed away on March 01, 2021. Her homegoing service will be at noon, Saturday, March 6 at Bethlehem Baptist Church, 3807 Lee St. in Greenville. Services planned with Love & Integrity Funeral Services.